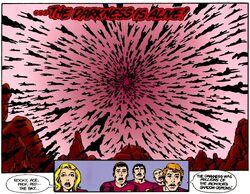 The Shadow Demons were the silent assassins of the Anti-Monitor.

They are the creation of the Anti-Monitor, who used the best of his Thunderers -- altering them into living 'Shadows'. He used them to conquer the Antimatter Universe.[1]

Nine billion plus years later, during the Crisis on Infinite Earths, the Anti-Monitor sent to them to oppose the forces of the Monitor who had gathered to oppose him.[2]