As the Seraph, he has fought for justice both on his own and as a member of the Global Guardians. He helped Superman retrieve an ancient artifact and dismantle a bomb in Israel. He also freed the Wonder Twins after they were brainwashed. Seraph fought crime solo, trying to think of ways to revive the Global Guardians.

In late 1980, he almost kills a criminal. God intervenes, temporarily stripping him of his powers. He only gets them back after praying for forgiveness during Yom Kippur.[1][2]

His current status is unknown.

Seraph's powers are primarily derived from various mythic artifacts he believes were handed down to him by historic figures chronicled in the Torah.

Power Loss: All his powers and artifacts will be rendered unusable if Seraph commit sins or abuses his powers. It won't return until the next Yom Kippur. 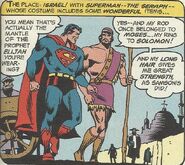 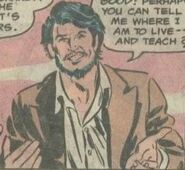