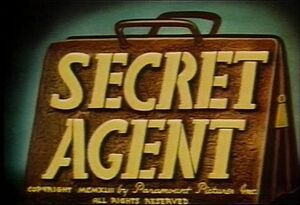 Secret Agent (1943) is the last of seventeen animated Technicolor short films based upon the DC Comics character Superman. Produced by Famous Studios, the cartoon was originally released to theaters by Paramount Pictures on August 30, 1943. This is the only short that Lois Lane doesn't appear in, although the female federal agent looks identical to Lois, just with blonde hair.

Clark Kent is driving in town and stops at a drug store to talk to his chief about covering his assignment. Outside, there is a car chase of a group of men that are trying to gun down another car. The gun men's car crashes into the drug store, and then steal Clark's car. Clark then dashes to catch up to the gangsters and grabs on to the rear of his car. As the chase proceeds, the two cars pass by a patrolling police car who then try to chase down the gangsters and the victim. The gangsters, seeing the police, try to shoot back at them, but Clark grabs a hold of the gangster's hand a keeps him from shooting by taking his gun and throwing it away. The gangsters use another gun to shoot at their victim's tires, and blows them out. Realizing that there is no way to catch their victim without getting caught by the police, the gangsters speed off with Clark on their rear bumper.

The agent, a young blonde woman that looks identical to Lois, steps out of her damaged car and tells the policemen that she needs to see the police chief at police headquarters. She explains to the police chief that she needs to take records to Washington, D.C. on the largest and most ruthless gang of saboteurs, who were just trying to gun her down in the car chase. For six months she tricked the gang of saboteurs into thinking that she was a part of them and in that time got records of all of the gang member's names along with their plans and that these saboteurs will stop at nothing to get the records back.

Meanwhile, Clark let himself be captured so he could listen in on the gangster's plans and learns that these gangsters are trying to get some records back from the girl, who is a federal agent in reality. So, they plan to stop her at the bridge to the airport.

The is the only episode short Lois Lane doesn't appear in.

Retrieved from "https://superfriends.fandom.com/wiki/Secret_Agent?oldid=78353"
Community content is available under CC-BY-SA unless otherwise noted.