Scott Free is the world's greatest escape artist and one of the New Gods. He is the son of Highfather Izaya, the ruler of New Genesis.

In the parallel-universe of Earth-One, as part of a diplomatic move to stop a destructive war against the planet Apokolips, Highfather agreed to an exchange of heirs with the galactic tyrant and despotic ruler Darkseid. The exchange of heirs guaranteed that neither side would attack the other. Highfather’s first-born traded places with Darkseid's second-born son Orion.[1]

This boy grew up in one of Granny Goodness' ‘Terror Orphanages’ with no knowledge of his own heritage. While he was there he was given the name ‘Scott Free’. As he matured, Scott rebelled against the totalitarian ideology of Apokolips. Hating himself for being unable to fit in, he was influenced by Metron to see a future beyond Darkseid. Scott became part of a small band of pupils who were tutored in secret by the rebel Himon,[2] a New Genesian living as a 'Hunger Dog' on Apokolips. It was at these meetings that he met fellow pupil Big Barda, who would later become his wife.[3]

Eventually, Scott, now an Aero-troopers (elite soldier), escaped and fled to Earth. His escape, long anticipated and planned for by Darkseid, nullified the pact between Darkseid and Highfather and gave Darkseid the excuse he needed to revive the war with New Genesis. On Earth, Scott made friends with a retired escape artist named Thaddeus Brown and his assistant Mr. Oberon. Thaddeus was planning a come-back, but before he could make it, he was killed by gangsters. Scott assumed Brown's stage name -- Mister Miracle and his costume, and, using Apokolipsian technology, avenged the murder. In the superhero tradition, he then kept both the name and the costume, along with the ‘super escape artist’ motif, for use in a career of evil-bashing.[4]

Granny Goodness, the cruel mistress of the Apokolips institution from which Scott Free once escaped, comes to earth and tries to destroy Mr. Miracle with the help of her soldiers and a mysterious, powerful being called Overlord.[5]

Her attack is the first of many, as Darkseid begins to rain down attacks on him. One of Darkseid's agents, Dr. Bedlam baits Mr. Miracle into a battle. Big Barda arrives on Earth to help Scott fight Darkeseid’s forces. Soon after arriving, she is taken prisoner by Doctor Vundabar's troops, which have also arrived on earth. To save her, Mister Miracle must literally step into danger and endure weapon after weapon. It would not be long after this victory that Big Barda is greeted on earth by the Female Furies of Apokolips (Lashina, Mad Harriet, Stompa, and Bernadeth), a battle unit assigned to kill her and Scott.[6]

After they defeat the Furies, Scott and Barda decide to return to the hellish world of Apokolips to confront their attackers. Scott wants to escape Apokolips’ grip, from ‘within’ the laws Darkseid has established – ‘freedom by right of combat!’ After saying goodbye to Oberon, they use Barda’s mega-rod to teleport to Apokolips. They arrive, but are unknowingly being watched. While driving in a magna car, they are attacked by the evil master assassin, Kanto. Impressed with Mister Miracle’s bravery, the master assassin lets Mister Miracle go with a warning to kill himself and his wife for “death at Kanto’s may be cleaner than death fashioned by Granny Goodness!!” Scott then seeks out Granny at her orphanage, He finds Hoogin, one of Granny's top guards. Hoogin was the one in charge of him when he was in Granny Goodness's ranks. He tells Hoogin to summon Granny. He wants to challenge her to secure his freedom. She scoffs at the request and orders him to Section Zero to face the Lump. Scott engages in an unusual battle with Lump. He is strapped down and forced into a mind link. Scott then battles inside the creatures mind! Meanwhile, Barda, through combat, enlists the Female Furies to help her find Mr. Miracle. Amazingly, Scott defeats the Lump by showing him his reflection causing a psychological defeat. Then he, Barda and female furies (who she leads against Darkseid's forces) head to Earth.[7]

Upon arrival via Boom Tube, Mr. Miracle, Big Barda, and the Female Furies they find that they had missed their destination and are under attack, from automated gun turrets, rising up from the ground. They have returned to earth in a territory belonging to the World Protective League. Because the attack was a surprise, they are rendered unconscious and captured. This league is not really in the business of protection, as they are currently threatening the nations of earth with their latest terror weapon, an Orbital Plague Bomb, currently being outfitted with a payload of deadly viruses. This bomb had one passenger, Scott Free. The Female Furies are able to escape, but unable to prevent the deadly launch. Unbeknownst to the Furies, Mister Miracle had also escaped and cut a big slit in the side of the rocket, which will widen in the vacuum of space. The Orbital Plague Bomb explodes in space, destroying it's payload of viruses. Mister Miracle and the Female Furies use Barda’s Mega Rod to open a Boom Tube, allowing everyone to escape, before the research facility is destroyed. Later, all return to Scott Free's house and are greeted by Oberon, who introduces them to Thaddeus Brown's son Ted.[8]

Doctor Bedlam returns, but is easily defeated by Mister Miracle. [9] Over the next year Scott and Barda get married.[10]

While honeymooning on New Genesis, Barda is kidnapped by Granny Goodness, Virmin Vunderbar, Kanto and Dr. Bedlam. They bring her back to earth. Scott follows, teaming up with Oberon. The two go after Granny. She forces Scott to enter a deathtrap without his Mother Box, but when he escapes, he finds that his foes have left, and still have Barda with them. He deduces that they are now on the moon and he plans to follow them. He finds Barda, but she has been brainwashed - conditioned, through torture, to believe that her husband is the enemy. Husband and wife engage in a brutal no-holds barred battle. Ultimately, it is Mister Miracle who triumphs over Big Barda. Gathering up Barda in his arms, it is Mister Miracle's intent to, first, get Barda medical attention on New Genesis. They soon discover that Granny Goodness has conditioned Big Barda to believe any separation from Granny will cause her to lose the will to live. Scott leaves her in Highfather’s care, then seeks the council of Himon then resolves to carry the fight to Apokolips, confronting Darkseid, once and for all. Scott broadcasts a message to hundreds of worlds openly defying Darkseid. He hopes that Big Barda, and all others will see that they are not constrained to obey the edicts of their oppressors. Patrols are sent to find Mister Miracle, but are unsuccessful. Their failure is met by a brutal execution by Kalibak, Darkeid.s son. Soon Scott is captured, put in chains, and placed beneath a rapidly descending, rotating blade. Using his X-ray lens, he is able to see the dump chute, beneath their feet. He kicks it open, then dives to saftey. Seeing Mister Miracle challenge the will of Darkseid and triumph, Big Barda shakes off Granny Goodness' conditioning, immediately regaining her sense of self.[11]

What follows is an epic battle with Darkseid. Mr. Miracle, believing his cause is just, raises himself up as a ‘Messiah’ for the Lowlies. However, he is soon cast out of Apokolips by Darkseid. Mister Miracle finds himself drawn down to the surreal realm of Ethos. While here, Mister Miracle comes to the conclusion that, though born of divinity, he stands apart from both New Genesis and Apokolips, for he is human. With this lesson learned, Ethos sends Mister Miracle on his way.[12]

Mister Miracle returns to Apokolips, just in time to rescue Oberon, who has been apprehended by one of Darkseid's Photon Patrols. Mister Miracle then teleports himself and Oberon to New Genesis to collect his wife, Big Barda. While there, Scott has a fight with his father Izaya regarding his time spent in the realm of Ethos. Izaya raises his Wonder-Wand, in a show of power and authority, only to find Mister Miracle as connected to the Source as he. Mister Miracle relinquishes his citizenship in New Genesis, and renounces his allegiance to Izaya. From this moment on, Mister Miracle's destiny is his own. Freedom is the only cause he will serve. Mister Miracle, Big Barda and Oberon return to their home.[13]

Obsessed, Darkseid tasks Granny Goodness with killing Mister Miracle. To that end, she deploys a Photon Patrol, to Earth. Upon arriving, she seeks a human woman to control. One to do her dirty work. The young girl eventually resists. In anger, Granny threatens to kill her parents. As she is spirited away to Apokolips, Granny Goodness vows to find the evil antithesis to Mister Miracle, one that will finally destroy the 'World's Greatest Escape Artist'.[14]

In the Earth-1A universe, not much is known about Scott Free. We do know that he showed up (in the SuperFriends Comic Book) as a co-host on a telethon hosted by Justice League and the SuperFriends.[15] 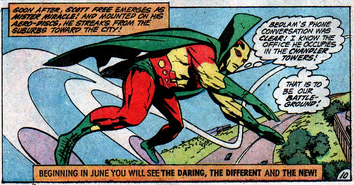 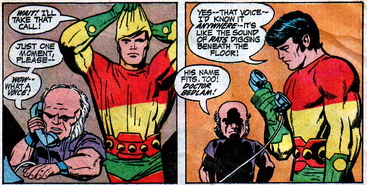 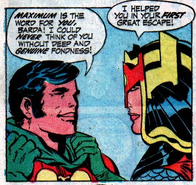 Retrieved from "https://superfriends.fandom.com/wiki/Scott_Free?oldid=63119"
Community content is available under CC-BY-SA unless otherwise noted.