Start a Wiki
Safety: Episode One 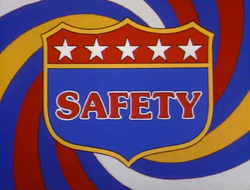 This was the first of several safety tips that were designed to help children learn how to make wise choices, rather than stupid ones that could get them hurt or killed.

This particular episode dealt with safe swimming practices, or more specifically; never swimming alone. These segments were approximately thirty-seconds long and were reminiscent of Sesame Street shorts on PBS, due to their educational value.

Aquaman is in the ocean on some sort of motorized surfboard[1] off the coast of what appears to be Miami Beach, or a similar beach resort. He is talking about how some sports are fun to do alone, but swimming is not one of them.

Nearby, a boy is drowning in the water, because his feet were tangled in the seaweed below. Aquaman frees him and tells him he should never swim alone, and he tells him next time to swim with a buddy.

Retrieved from "https://superfriends.fandom.com/wiki/Safety_(Episode_1)?oldid=87324"
Community content is available under CC-BY-SA unless otherwise noted.