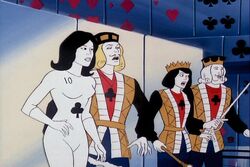 The Royal Flush Gang are a gang of supervillains that were professional crooks.

A mysterious figure named Ace did the recruiting. After observing a group of petty crooks, Ace forcibly recruited the small group.

Once recruited, they were dressed up as playing cards, and are given flying cards as transportation.

Darkseid is apparently their benefactor.

Their headquarters in 1983 was the Harlequin Card Company and in 1985 it was the House of Cards.

Retrieved from "https://superfriends.fandom.com/wiki/Royal_Flush_Gang?oldid=81784"
Community content is available under CC-BY-SA unless otherwise noted.