Richard "Dick" Donner is a movie director and producer. To fans of DC Comics and Marvel Comics he is best known for his role in producing and directing the Superman and X-Men film franchises.

It was Dick Donner that realized that the casting of Superman shouldn't have been someone famous; but rather an unknown. This led him to begin a search, and eventually Christopher Reeve was chosen to play the role.

Dick Donner was working on the first two Superman films simultaneously; his work for the first film was completed, however his relationship with the producers was that of constant conflict. At one point he even shouted at them, telling them to "get off the goddamn set!"

This went on for sometime however he continued to develop a close friendship with the cast, keeping his conflict with the producers fairly quiet when around them. Eventually he learned however, that before he was done with Superman II, he was fired by the producers.

He was replaced by another director who added many "campy" and "slapstick" elements to the film which ruined it in Dick Donner's opinion. Thankfully, many years later, in 2006, Dick's cut of the movie was finally released by Warner Home Video to DVD.

Dick Donner has also enjoyed writing for DC Comics, where he teamed up with Geoff Johns to write for Action Comics. He also directed and/or produced a number of famous movies, such as The Omen (1976), The Goonies (1985), Lethal Weapon (1987) and Scrooged (1988).

As a much younger man, he worked on The Twilight Zone episode Nightmare at 20,000 Feet, starring William Shatner. 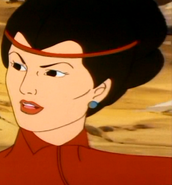 Ursa
Creator
Add a photo to this gallery

Retrieved from "https://superfriends.fandom.com/wiki/Richard_Donner?oldid=82438"
Community content is available under CC-BY-SA unless otherwise noted.