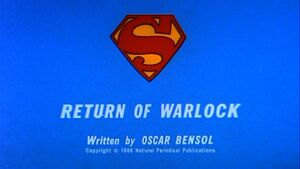 At midnight at the Metropolis Museum, an invisible figure approaches a display of a rare gem known as a Sorcerers Ruby. The invisible figure shatters the glass and picks up the ruby, and becomes visible, it is the Warlock, who now possesses the ruby which can allow him to perform impossible feats of evil magic, and plans to use his powers to get revenge on Superman for destroying his last ruby. Just then, police sirens are heard, which alerts Warlock to the obvious fact that the police are on their way. He then makes himself invisible.

A short while later Clark Kent and Jimmy Olsen are at the museum talking with the police. The Police Lieutenant on the scene tells them that the museum guard never seen anyone leave, he then turns to the other policemen and tells them to thoroughly sweep the area. Clark is suspicious that it might be the Warlock. Jimmy then wanders off toward the Dinosaur exhibit. Warlock is standing on top of a Tyrannosaurus Rex, and he recognizes the young reporter. He then uses his magic from his ruby to bring a Brontosaurus to life and it attacks Jimmy. Clark hears Jimmy screaming for help with his super hearing and he spots him in the room he's in with his X-Ray vision. He immediately transforms into Superman to rescue him, and he catches Jimmy just as he is knocked out of the window by the large prehistoric skeleton. Superman then confronts the Warlock and he mocks Superman telling him it took him long enough. Superman attempts to grab him but he makes himself disappear.

The following morning, Warlock is stationed on top of a building near the Daily Planet. He watches Main Street below, and he sees Lois Lane driving in her car. He then uses his ruby to fire an energy blast at her car. The blasts then cause her to drive up the side of a building. Superman, flying overhead, spots the damsel in distress with his telescopic vision. He grabs hold of her car and takes it back to the ground. Warlock laughs and says that he shook up Lois, but there's nothing old "Super-poop" can do about it at all. Superman tries to grab the supervillain, but he is once again unsuccessful because he disappears yet again. Superman then deduces that Perry White will likely be the next victim the evil sorcerer assaults.

Somewhere near a construction zone, Perry is driving in his car, when all of the sudden his car becomes attacked by Warlock's ruby, who uses it to rock the car back and forth. But Superman jumps in to the path of the ruby's beam. Warlock tells Superman to back off or else he'll toss Perry and his entire car into the ocean. So Superman backs off, he starts back, taking backward steps. He then falls into the hole of the construction zone, and this causes Warlock to laugh, but Superman had that planned, and he walks through a pipe and climbs up and man hole and grabs the ruby from behind the sorcerer. Superman then flies back out of the construction zone hole and tells him he's had his fun, but now it's over. Warlock then goes for his wand, but he sees that the ruby is gone. So he makes a run for it, and finds a parked car and steals it, and speeds off. As the Warlock heads toward Metropolis State Penitentiary, Superman grabs the car and sets him down behind the prison walls. Just then, a prison guard seizes the criminal.

Back at the Daily Planet, Lois is telling Clark about how her car lost control and she drove right up the side of the building. Clark just laughs at her and says: "You women drivers!"

The episode title refers to the fact that this is Warlock's return appearance, as he was last seen in The Wicked Warlock.

Retrieved from "https://superfriends.fandom.com/wiki/Return_of_Warlock?oldid=84188"
Community content is available under CC-BY-SA unless otherwise noted.