He served as an Intergalactic Space Patrolman for most of his one hundred thirty-seven years of life.

He was killed in the line of duty, while stopping a massive black hole from destroying his home sector.[1]

Quarzz Teranh was a joyful member of the Green Lantern Corps. One day in 1982, Quarzz was out on patrol in outer space, and while he was patrolling, he couldn't help but marvel at the awesomeness and beauty of space; and its' untold wonders.

As he begins to think about the dangers of space, he notices a starship flying by, that has a hole in it, and using his power ring, he seals it. He continues pondering the paradox of how if there were no dangers in space, then he wouldn't need to be a Green Lantern at all; nor would there be a need for the Green Lantern Corps.

As he continues his flight through Sector 151, he resumed his thoughts about how his home sector was truly peaceful. Evidently he was quite aware that the Human race, which was from Earth, was a very violent species, and he started to think that it's just as well that they hadn't ventured that far out into space yet; as that would likely end the peace.

Just as he began to have that thought, the Guardians of the Universe appear before him, and he assumes that they are about to give him an important assignment. He was stunned when they instead tell him that they need his council. They told him that a black hole emerged in the center of his home sector, and it continued to grow in size, and that eventually it would consume every living being in existence. They were well aware that if they send him to try and close the black hole, that he likely wouldn't survive; and even if he did, he likely would no longer be in the physical shape necessary to continue his role as a Green Lantern.

He reassures them that they didn't ask too much of him. He told them he didn't fear death, and that the Green Lantern Corps represented life, not death...and he told them he will save the universe no matter the cost to him. The Guardians realized they had no choice, and Quarzz tells them "I am a Green Lantern." Truly, being a Green Lantern was his only reason for living.

He recites the oath, and charges his ring with the Guardians energy. And he heads off to seal the black hole. As he takes flight, he realizes that he shall miss the universe. Just then he notices a couple of space cruisers getting pulled toward the black hole. He realizes he had never seen a black hole like this one, he was still lightyears away from it, yet its' pull was magnificent. He attempts to save the space cruisers, but the pull was too great, they crash through his energy construct as if it were paper.

Afterward, he was lying on a small meteoroid; one of many pieces of rocky debris that was falling toward the black hole, that was no doubt pelting him. His body was badly banged up, due to being struck many times by many things falling toward the black hole. It was there that Xylpth and Ghr'll found him, telling them the guardians my be able to heal him. He tells them it's too late, that they should leave him there with the stars, which he considered his friends. The other two Green Lanterns fly off, leaving him behind there, his final resting place...[2] 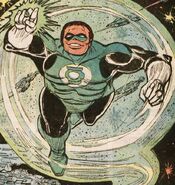 Xylpth and Ghr'll mourn over their friends' death.
Add a photo to this gallery

Retrieved from "https://superfriends.fandom.com/wiki/Quarzz_Teranh?oldid=82327"
Community content is available under CC-BY-SA unless otherwise noted.