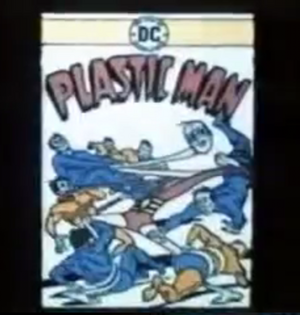 Plastic Man, his girlfriend Penny, and his Polynesian sidekick Hula-Hula travel the world for a secret government agency and are given their assignments from the unnamed Chief to stop any threat to the world. Plastic Man often retains his sense of humor even in dangerous situations, such as a giant octopus capturing Penny and Hula-Hula causing him to comment "What Scout troop did he belong to"? In early episodes Penny has a crush on Plastic Man, who chooses to ignore it as he himself has a crush on the dark-haired female Chief. However, in the second season Plastic Man reciprocates Penny's crush on him and the two marry. The marriage produces a son who has the same powers as Plastic Man and spawns a lighter series of episodes featuring "Baby Plas" doing things such as saving his friends from neighborhood bullies.

Introduction to Each Episode

On October 20, 2009, Warner Home Video has released The Plastic Man Comedy/Adventure Show: The Complete Collection, featuring the 35 Plastic Man cartoons on DVD in Region 1 for the very first time. The other segments were not released. [1]

Retrieved from "https://superfriends.fandom.com/wiki/Plastic_Man_(TV_series)?oldid=89574"
Community content is available under CC-BY-SA unless otherwise noted.