Oa is a planet that lies at the center of the universe. Oa appears as a desert-like, lifeless planet. The main feature is the Guardian's city. Since its inception, Oa has been the planetary citadel of the Guardians of the Universe and the headquarters of the Green Lantern Corps.

Fifteen billion years ago, the planet Maltus formed. Millions of years passed as the planet slowly cooled and life formed in the moist air of the new world. The air borne life spread across the globe while more complex forms took to land and sea. The Maltusian race evolved, humanoid in appearance, one of the first intelligent life forms in the Universe. This was the beginning of a new age of cultural and scientific advancement. Their minds allowed them to create miracles as their lifetimes extended millions of years. Unfortunately, the power came at a price. And so, as their population increased, the humanoids evolved into separate races, blue-skinned and white-skinned. These races began to wage war against each other. Biological warfare resulted in the creation of a deadly disease virtually eliminating the possible of procreation, which almost wiped out the humanoids. Specifically, the white-skinned males. In order to survive, the blue-skinned male scientists of the polar city of Ap formed an alliance with an isolated society of white-skinned women who inhabited the Zamar area, and produced future generations of children by laboratory means. The males came to be called Aps, and the females Zamars. Those chosen to form a mediated group, raised the children, and called themselves Oans. As ages passed, the Oans evolved fantastic mental powers and increased lifespans, becoming virtually immortal.[1]

In a pivotal moment, billions of years ago, a Maltusian named Krona used time-bending technology to observe the beginning of the Universe. His interference with nature somehow retroactively became the spark to ignite the ‘flaw’, thus creating an anti-matter counterpart to the universe, as well as splintering the single universe into a multiverse consisting of an infinite number of parallel universes, each with duplicates of all stars and planets except for what would eventually be known as the planet Oa. This unique planet has no duplicate in the multiverse. It is only duplicated in the antimatter universe as the planet Qward.

The Oans, feeling responsible for renegade scientist Krona's creation of the Antimatter Universe and the mulitiverse, and wanting to champion the cause of order, decided that a group of volunteers would colonize a planet near the center of the universe, which they named 'Oa'. It is from here that they believed that they could do the most good.[2] These Oans, were consumed by guilt. They had created Evil, so they must do something to constrain it. Their first attempt to do so was the construction of 'Manhunter robots', which later proved defective. Their second, and better, solution was the creation of the Green Lantern Corps.[3]

Leaving Maltus and Heading to Oa! 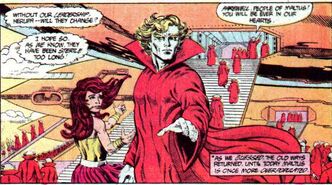 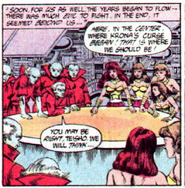 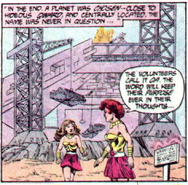 It did appear in the Filmation Series, The Superman/Aquaman Hour of Adventure (1967 – 1968) as part of the Aquaman Segement, in the Green Lantern Episodes:

Retrieved from "https://superfriends.fandom.com/wiki/Oa?oldid=83638"
Community content is available under CC-BY-SA unless otherwise noted.