Nudity was when someone was not wearing any clothing, and therefore naked.

In some cultures, public nudity was considered indecent exposure, while in other cultures, it was normal and everyday thing.

For example, on the planet known as Arbora, it was common for the Arborans to walk about on their world completely naked, and it's unlikely they even knew the concept of clothing.[2]

On Earth, in most regions; although it wasn't usually socially unacceptable for a male of the Human species to expose his breasts, if a female exposed hers, it was usually considered an offense, unless she was too young to have fully developed them.

Animals too, were almost always naked, although a few of them wore clothing, such as Tawky Tawny, but this was a rare exception because he was a super-intelligent tiger.[3]

When the Human race was first created by God in the Garden of Eden, Adam was naked. The creation of man was observed by Etrigan.[4]

During the 16th century, Michelangelo painted a famous work of art known as The Creation of Adam, which depicted Adam in the nude.[5]

When Hippolyta molded Princess Diana from clay, she was naked.[6]

When Oliver Queen was swept onto Starfish Island, he was naked, as he had just had sex with a girl on a yacht before jumping overboard. While he was on the island, he fashioned clothes for himself out of plants; so that he could protect himself from the elements.[7]

During the prelude to what would have been an invasion from Apokolips, Joker and other supervillains stampeded through the streets of Gotham City with the aid of Joketroopers and Penguin Commandos. During this incident, Harley Quinn captures Wonder Woman, strips her naked, and steals her costume, wearing it herself. The Joketroopers have the naked Wonder Woman bound in her own Lasso of Truth.[8]

Painting depicting God as well as Adam in the nude 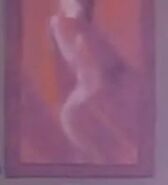 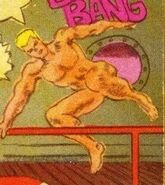 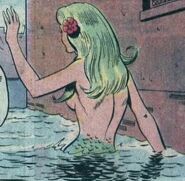 Naked people
A Halo of Flies 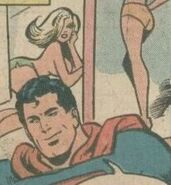 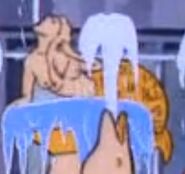 A statue of a topless mermaid.
The Bizarro Super Powers Team
Add a photo to this gallery

Retrieved from "https://superfriends.fandom.com/wiki/Nudity?oldid=90558"
Community content is available under CC-BY-SA unless otherwise noted.