The Novarians are an alien species from another world in outer space.

A group of Novarians crash landed on Earth several decades ago while they were on a survey mission. They have been stranded on Earth ever since.

Their large hairy appearance gave rise to the legend we know as Bigfoot.

Sometime in 1980, the SuperFriends help them repair their ship and send them on their way back to their home planet of Nova.

Bigfoot, also known as Sasquatch, is an alleged ape-like creature purportedly inhabiting forests, mainly in the Pacific Northwest region of North America. Bigfoot is usually described as a large, hairy, bipedal humanoid. Many believers in its existence contend that the same or similar creatures are found around the world under different regional names, most prominently the Yeti of the Himalayas.

Legends of the Bigfoot date back to at least the early 1800s.[1] 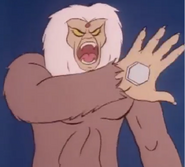 The Leader of the Novarians

The Leader of the Novarians 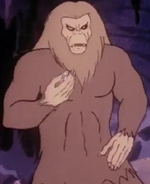 The repaired ship
Add a photo to this gallery

Retrieved from "https://superfriends.fandom.com/wiki/Novarian?oldid=73410"
Community content is available under CC-BY-SA unless otherwise noted.