Mr. Mxyzptlk is an imp (a mythological, mischievous being similar to a fairy or demon) from the 5th Dimension. He has magical powers which is normal for a someone native to his dimension. Although mostly just a practical joker, his playful escapades have endangered many lives, so giving him the supervillain title would not at all be inappropriate. 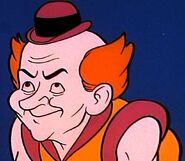 Mr. Mxyzptlk during his first encounter with Superman.
Add a photo to this gallery
Mxyzptlk as he appeared in SuperFriends: The Legendary Super Powers Show

Mxyzptlk can manipulate reality and the laws of this universe in such a way as to appear magical. It does appear that there is a limit to his powers. It also appears that once he leaves, any effects of his magic is removed.

He only has one weakness, if he is tricked into saying his name backward, then he will be banished back to the 5th Dimension. However, this banishment will only last three months, and after that three month period is up, he will be able to return to the 3rd Dimension (our dimension). Time and time again he has pestered the JLA, only to be defeated each time.

Continuity from The New Adventures of Superman

Mr. Mxyzptlk first meets Superman in the The New Adventures of Superman episode The Imp-Practical Joker. That is the one and only episode that he appeared in from the Filmation cartoons.

new SuperFriends: The Rise and Fall of the Superfriends

Retrieved from "https://superfriends.fandom.com/wiki/Mr._Mxyzptlk?oldid=20201"
Community content is available under CC-BY-SA unless otherwise noted.