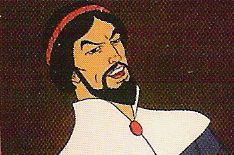 The magical Morgana was once Hercules' lady love, but things ended badly. Now, she wants revenge, and when Pegasus incorrectly overhears something Hercules says, the winged stallion delivers himself right into Morgana's clutches! Now, the Freedom Force must save him and help rid Hercules of his fatal attraction!

Pegasus is enjoying eating grass in a green pasture, when all of the sudden glowing flowers spring up from out of nowhere and he begins chasing them. He chases them clear over to a dark castle.

Meanwhile, in the Valley of Time, Hercules is asleep and Lampfree is reading Merlin's magic book, trying to see if he can cast some spells of his own, but he ends up going on a wild magic carpet ride. He calls out to Hercules for help, he quickly wakes up, and calls out to Pegasus, who is still with the glowing flying flowers, he then rushes to his master's call, and unseen to Pegasus, the flowers then turn into a mysterious woman saying; "I almost had him that time!"

Meanwhile, Hercules asks Pegasus where he had been, because they were supposed to be on duty. He then hops on Pegasus and they fly off after Lampfree. Hercules tells him that he can only stop it if he tells the magic carpet to "stop!" Lampfree obeys, but once the carpet stops in midair, he takes a plunge into a pond below.

After getting out of the pond, Hercules lectures him, telling him that Merlin's magic is dangerous, he then turns to Pegasus, warning him not to wander off anymore.

Back at the Valley of Time, Lampfree is holding a medallion that has a horse inscribed on it, and he asks Hercules about it. He told him it was given to him years ago by a beautiful woman named Morgana. He said that he had loved her dearly, until he learned she was actually an evil sorceress. He then tells Lampfree that he better get rid of it and move on. About that time Pegasus walks into the room, and overhears Hercules, and he misunderstood him...thinking he was talking about getting rid of Pegasus. This upsets him, so he walks off outside. There, he is greeted by another glowing, flying flower.

Meanwhile, back at the Valley of Time, Hercules is searching for Pegasus but is unable to find him. The magical flowers continue to lead Pegasus away from the Valley of Time, and they lead him to a small pond and he begins drinking from it, and it transforms him into a green statue. One of the flowers then turns into Morgana, and she says that since Hercules rejected her love, she has now taken his horse! She rushes off, and the other two flowers turn into small monsters of some kind, and they take Pegasus to her castle. There, she has her henchman put the Pegasus next to the other statues.

Later, in the Valley of Time, Hercules is still unable to find Pegasus. He asks Lampfree if he had seen him, and he said that the last time he saw him was when they were talking about the medallion. Hercules then realizes that Pegasus must have overheard him saying that he was going to get rid of "that horse," referring to the medallion, but evidently Pegasus thought he was referring to him. He tells Merlin of the situation and Merlin tells him that he can use his magic Ring of Truth to show where Pegasus is. They then learn that Pegasus is being held by the sorceress Morgana. Merlin then gives Hercules his magic carpet to speed up his journey to Morgana's castle. Merlin then notices that the carpet is soaking wet, and he questions Lampfree about it.

Hercules later arrives at Morgana's castle, and he tries to free the statuesque Pegasus, but he is confronted by Morgana and her henchmen. He tells her that he will be her slave forever only if she will set Pegasus free. Morgana agrees to his terms, and she turns him back into a living winged stallion. Pegasus the flies away. Morgana then puts a spell around the castle so that no one can come in or out without her say so. She then takes him to do his first task as a slave of her.

Back at the Valley of Time, Pegasus causes a ruckus, and tries to get Merlin to understand what had happened, but without the ability to speak, it proved to be difficult. But thankfully Merlin already knew, since he was magically observing the whole situation. Isis and Sinbad then arrive as they had been summoned by Merlin. Merlin tells them he has a plan.

Meanwhile, Morgana shows Hercules where she grows herbs for her potions. She tells him to uproot all of the eyesores that have cropped up. He begins, but Morgana tells him that he's dug up everything but the flowers. He tells her that "One man's eyesore is another man's treasure." Just then, the other members of the Freedom Force arrive: Merlin, Isis, Sinbad and Pegasus. Isis then chants a spell and causes the gloomy castle to have clear skies. Morgana then complains because she feels that her landscaping is now ugly. She releases her spell so she can have her Gargoyles attack. During the fight, Merlin causes the two gargoyles to collide with each other, causing them to be smashed into pieces. She then lights a fire in the upper hall of her castle, drawing power from the flames as they reach their peak. Outside of the castle, on the ground, Sinbad sees the smoke coming from the upper hall and uses his Hydrokinetic powers to extinguish the flames with water. Morgana is all wet and angry. She tells them to leave her castle at once. They all cheer and laugh.

Later, Isis rejoices now that Hercules is free, and no longer a slave of the evil sorceress Morgana. Hercules then apologizes to Pegasus for the misunderstanding between them, and that never again will a misunderstanding come between there friendship. And as they fly off, heading back to the Valley of Time, Hercules says that Morgana has learned that revenge isn't sweet.

Retrieved from "https://superfriends.fandom.com/wiki/Morgana%27s_Revenge?oldid=72115"
Community content is available under CC-BY-SA unless otherwise noted.