Metropolis was a city located at least partly in Metropolis County, USA. It was one of the largest and wealthiest cities in the United States that was best known as being the hometown of Superman.

Metropolis was located 'right over the bridge' from Gotham City.[2]

The Natives of Metropolis were often referred to as Metropolitans.

By the 40th century, Metropolis becomes an intergalactic spaceport, making it a hub for beings from every end of the galaxy.[3]

By the year 80,000 AD, Metropolis was a large Computer City protected by the Assault Monitor.[4]

A wide shot of Metropolis
Bad Day on Black Mountain

A road sign shows the way to Metropolis
The Iron Eater

The Metropolis skyline
Circus of Horrors 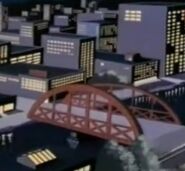 The outskirts of town
The Iron Eater

A farm outside Metropolis
Monolith of Evil

Somewhere in Metropolis
Monolith of Evil 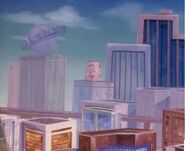 View of Metropolis
The Seeds of Doom

In the Super Friends, the exact location of Metropolis has never been canonically established: