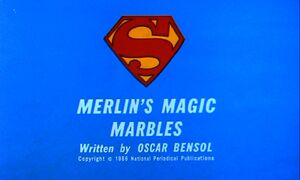 Setting
Metropolis, 1971
Previous Episode
Next Episode
The Prehistoric Pterodactyls
The Threat of the Thrutans

Inside Lex Luthor's hideout, Luthor, frustrated with constantly getting defeated by Superman, creates a time machine which gives him the ability to communicate with the ancient wizard known as Merlin. When he sees the image of Merlin appear on the time machine's screen, he says: "Great Lucifer! It's...Merlin! The great wizard of King Arthur's Court." Merlin asks why he was summoned and Lex tells him he is seeking a magical formula that will allow him to commit deeds undetected. Merlin then tells him that he should use his magic marbles so as to turn him into an eight-year-old child. Merlin then proceeds to give Luthor a formula to create the magic marbles.

Later, at a police station in Metropolis, Daily Planet reporter Clark Kent is making a working visit. Just then, an alarm goes off and the dispatcher tells Clark that there's a holdup at the Metropolis Bank, a bank right next door to the antique store. The dispatcher then radios all cars about the incident, and meanwhile, Clark steps outside and changes to Superman and flies off to the scene.

At the bank, gunshots fire, a woman screams, and Lex Luthor and his accomplice run out of the building. Lex then pulls his magic marble out of his pocket and they are transformed into children. Two cops approach the scene, but they cannot find the bank robbers, and when Superman arrives, they describe the robbers but tell him they both got away. The two criminals in their disguise as youngsters ask Superman for an autograph, but he tells them "not now" and flies off. They then point their guns in the sky aimed at him and play like they're shooting him saying: "Bang! Bang!" And then they laugh childishly.

Later, Lex Luthor and his accomplice rob the Metropolis Museum. They steal the Palmyra Ruby. Superman checks out the scene, and he is once again baffled at how the thieves continue to disappear as if by magic. The Man of Steel is starting to get frustrated.

Superman later hears a report of an armored car that had been robbed on a side street near Harry's Meats. Superman can find no sign of the thieves. But just then, Luthor and his accomplice, disguised as children drive by on their bicycles.

Later, Luthor uses his time machine to talk to Merlin again and tells him that the marbles worked wonders, but he needs to use something else before Superman catches on to his diabolical scheme. So he asks Merlin for other magic he could use, and Merlin tells him that he has a shadow potion.

At the Daily Planet, in the office of Perry White, Clark tells Perry that Superman doesn't know what to do about the disappearing thieves. Suddenly, Metropolis seems to black out! "Great Caesar's Ghost!", said Perry, and then he walks off to find a flashlight. Then Clark changes to Superman and flies out the window.

At the Metropolis Mint, a loading truck pulls up to the building and it's driver is completely invisible. Luthor tells Blinky to blow the doors and run in and grab the gold. Meanwhile, Superman locates the source of the blackout, a line had been cut at the Metropolis Power Plant, he repairs it, and then flies off. Now that the lights are back on, Luthor and Blinky are both visible, as the light shines on them. Two police officers tell them to come out with their hands up. They use a giant cannon to shoot the cops, but Superman flies down in the path of the gun, and he catches the cannon ball. Luthor then uses a magic marble to turn himself young and then he makes a break for it. Superman runs after him and picks him up, capturing him.

Back at the Daily Planet, Perry White asks Clark Kent if he believes Luthor's story about Merlin. Clark tells him that he definitely does, after all, he believes in Superman.

The episode title refers to Merlin's magic marbles which he gives to Lex Luthor to give him magical powers.

Retrieved from "https://superfriends.fandom.com/wiki/Merlin%27s_Magic_Marbles?oldid=84172"
Community content is available under CC-BY-SA unless otherwise noted.