J'onn J'onzz is a green-skinned extraterrestrial humanoid from the planet Mars, who worked as a detective in Middleton under the persona of "John Jones". He is a charter member of the Justice League of America.

In the parallel universe, known as Earth-One, the year is 1955 (1967 in the Earth-1A universe) and Professor Mark Erdel (world-famous scientist) is working on a communication device, with the hope of making contact with extraterrestrial life in his lab.[2] Upon its first use, he realizes that he had inadvertently created a teleportation beam. Amazingly, this device pulls J'onn J'onzz to Earth in his Martian form. The shock of the encounter kills Prof. Erdel and leaves J'onn with no method of returning home.[3]

Since the Manhunter (type of law enforcer) from Mars is now on Earth, J'onn J'onzz, decides to use his shapeshifting power to appear human. He then assumes the identity of John Jones and secures a job as a Middleton (a city in the state of Colorado) police detective. All the while, he hopes that Martian technology will advance to a stage that will enable his rescue.[4] Not quite a year later, J'onn J'onzz is able to briefly make contact with his home planet Mars and his parents.[5]

Over the next few years, he had realized that working in the shadows and exacting justice as police detective John Jones was the right course of action,[6] as people everywhere feared an alien invasion. Everything went along smoothly in his hidden persona, until the evening of February 11, 1959 (1971 in the Earth-1A universe)[7] That night everything changed. A panic is generated by the revelation of the presence of Martians on Earth. The invaders had come to earth in search of earth’s newest arrival, the Martian Manhunter. Commander Blanx, and a small squadron of White Martians have been scouring the universe looking for the Manhunter. The Manhunter confronted Blanx, and the White Martians. Their conflict was interrupted by Barry Allen a young and inexperienced Flash. He and the Manhunter partner up, but realize that the civilians, upon seeing the aliens began to panic. The Flash decides to seek help from other well-known heroes. He is able to gain the help of Superman, Batman, Robin, Hal Jordan, a pilot for Ferris Aircraft (before he became the Green Lantern) and several other heroes. After their success, Superman, Wonder Woman, Aquaman, Flash and the Manhunter discuss forming a club or a society to uphold Justice in the World. Batman says he’s not much of a joiner and the rest discuss the panic that was involved in this Martian excursion and the fear that coming together as a team with a Martian might foster. So they decide to wait until the time is right. Hal Jordan and the gathered reporters present also offer their oath of silence believing that global panic would not be good.[8]

Later that year, despite the concern of many, J'onn reveals his existence as an alien to the world, by openly fighting crime in a green-skinned form.[9]

A few years later (February 1973 in the Earth-1A universe), earth’s mightiest heroes (the Flash, Wonder Woman, Superman, Batman, Aquaman, Martian Manhunter and the Green Lantern) are called together again to stop the invading Appellaxians. The assembling resulted in the formation of Justice League of America![10]

By 1964 (1974 in the Earth-1A universe), Detective John Jones is presumed dead, killed in action by the Idol Head of Diabolu, an artifact which generates supernatural monsters. And so, J'onzz decides to abandon his the civilian identity.[11]

J'onn would serve as a regular member of the Justice League of America over the next several years. On one occasion (1975 in the Earth-1A universe), a group of evil Martians led by (the now) General Blanx, destroyed the surface of Mars, forcing all the good Martians to leave and colonize another planet. The Manhunter is able to arrive in time to defeat and kill General Blanx. With his homeworld destroyed, J'onn decides to accompany the survivors into deep space to find a new home and bids farewell to his friends in the Justice League.[12] Soon J’onn and his people are able to settle on an ancient, yet uninhabited planet called Vonn.[13] Vonn, which they rename Mars II (or New Mars), is the fourth planet from the red sun of the Star-System Cygnus.[14]

Early the next year, young Jr. SuperFriend Marvin is on tour of the Hall of Justice. As they walk through the wax figures, Superman points out the figure of the Manhunter and says that "J'onn J'onzz, Manhunter from Mars, left (Earth) when Mars became desolate and his people went to search for a new world."[15]

Over the next few years J'onn was seen occasionally helping the JLA.[16]

Eventually J'onn is awarded leadership of Mars II. Shortly after he is voted leader for a second term, he travels to earth to find a killer.[17] This leads to the investigation moving to New Mars. Superman and Batman aid J’onn on his new home world to bring down the criminal.[18]

On one notable occasion, the Martian Manhunter is seen rapidly entering the earth’s atmosphere and crashing into the East River off Manhattan. As the JLA comes to his aid, he tells them that a squadron of Martian warships hot on his tail with plans to conquer the earth. The Manhunter is eventually able to confront the fleets Marshal in open combat. He defeats the Marshal and is able to convince the remainder of the fleet to agree to a cease-fire. They leave Earth's orbit to return to Mars II. J'onn however, elects to stay behind on earth. In the aftermath of the confrontation, the JLA HQ Satellite is virtually destroyed.[21]

Not long after deciding to stay, the JLA had a few changes and several members resign, leaving an opening for the Manhunter to take.[22] J’onn eventually decided to revive his John Jones identity.[23]

Shortly after John Jones settles into his secret identity, the red skies of the Crisis begin to appear on both Earth-One and Earth-Two. They do so, as the Manhunter and the Detroit Branch of the JLA is engaged in battle Earth-Two’s Infinity, Inc.. The JLA is defeated. The Manhunter is able to ferry his unconscious comrades away.[24]

As red skies consume the earth, J’onn finds himself aboard a strange satellite orbiting the earth along with a massive congregation of heroes from Earth-One and Earth-Two – against their will. They have been summoned by three individuals. One is Alex Luthor, Jr. from Earth-Three. The other two are called Pariah and the Harbinger. Together the three explain how a being called the Anti-Monitor has released a massive antimatter wave, absorbing the energies of the destroyed positive matter universes and growing stronger even as his counterpart, the Monitor grew weaker. Now his counterpart is dead. They are told there is chance to defeat the Atni-Monitor if they protect a series of ‘Anti-Tuning Fork’ which are dispersed across space and time. This task will not be easy, as they will surey be attacked by the Anti-Monitor's Shadow Demons along the way. These ‘Anti-Tuning Forks’ were designed to protect the multiverse, by merging the five surviving Earths [Earth-One, Earth-Two, Earth-S, Earth-X, and Earth-Four] into a single one that could resist the Anti-Monitor's on-coming wave of anti-matter,[25] or else all worlds will be destroyed.[26]

It soon becomes clear that the plea of the three must not go unheeded. J'onn, along with Azrael, the Earth Two Flash, Katana, Blue Beetle (of Earth-Four) and his Bug are transported to Earth-Four to stop the impending doom. They are hindered by Earth-Four heroes: Captain Atom, Judo Master, Nightshade, Peacekeeper, Thunderbolt, and the Question who appear to be mind-controlled by a strange unseen force. [NOTE: We learn later that the Anti-Monitor has employed the Psycho-Pirate to use his emotion control powers to terrorize the populations of the planets he sought to conquer and destroy.].[27]

The next mission for J'onn, involves the Supermen of Earth-1 and Earth-2, Mon-El, Lady Quark, Captain Atom, Jade, Green Lantern of Earth-2, Wonder Woman, Captain Marvel from Earth-S, the Ray from Earth-X, Wildfire, Firestorm, Dr. Light, and Supergirl. They are led by Pariah through the portal between the two universes, that was opened by Alex Luthor, Jr. They are poised to do battle against the Anti-Monitor in his floating stone fortress in the Antimatter universe. As the heroes converge on their powerful foe, Supergirl is dealt a deathblow. The Anti-Monitor, is weakened but escapes. His fortress falls apart and our heroes head back to back to their own universe.[28]

J’onn soon finds himself on the nearly destroyed JLA Satellite with Cyborg and Ray Palmer, the Earth-One Atom (despite him being on hiatus from super-heroics).[29] They are waiting for Vixen to bring them the famed robotics expert Professor T.O. Morrow, so they can perform repairs upon the robot that he invented – Red Tornado. On the way to the Satellite, she gains the aid of Firestorm and Firehawk. Soon they are joined by John Stewart (aka the Green Lantern) with the Blue Devil. Suddenly, something deep within the Tornado's bio-system activates and a huge explosion tears through the satellite. Morrow appears to be killed, and the Blue Devil finds himself transported to the Vegan system to deal with the Omega Men.[30] The rest of the heroes are able to escape with a wounded Manhunter.[31]

As the Crisis continues, J’onn recovers and finds himself on another mission on the partially merged Earth-S. They are sent to aid in the rescue of the captured Marvel Family by Doctor Sivana, Doctor Cyber, Per Degaton, Houngan, Phobia, Despero, Deathbolt, Hector Hammond and surprisingly, Professor T.O. Morrow. J’onn arrives with the Atom, and Platinum of the Metal Men. The heroes are successful.[32]

Meanwhile, the Harbinger has been gathering heroes for one last heroic confrontation on the planet of Qward (a planet located at the very center of the antimatter universe). The Supermen of Earth One and Two, Power Girl, ‘Martian Manhunter’, Kid Flash, new Dr. Light, Captain Atom, Lady Quark, Firestorm, Firehawk, Captain Marvel, both Wonder Women, Negative Woman, Superboy-Prime and other heroes are on hand. As they arrive, the Kid Flash sees an image of the Flash—the last one Barry cast before his death. Wally follows the after-image to where an insane Psycho-Pirate clutches at an empty uniform. Kid Flash knocks him out and Lady Quark finds his ring. Pariah senses evil and the Anti-Monitor appears. Our heroes strike at the Anti-Monitor. He falls back to a nearby planetoid seemingly killed and our heroes cheer. The heroes retreat through the portal that a weakened Alex Luthor, Jr. is trying to keep open. As they begin to disappear, the Anti-Monitor strikes at the Wonder Woman of Earth-One and she appears to disintegrate. The elder Superman of Earth-Two, believing he has the least to lose (no world and no wife to return to), confronts the evil Monitor head-on. Superboy of Earth-Prime decides to stay and comes to Superman’s aid. Alex warns that the he has very little power left to keep the portal open. This is the last J’onn sees of the Earth-Two Superman, Superboy-Prime and Alex.[33] 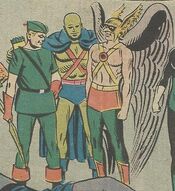 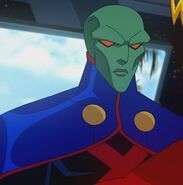 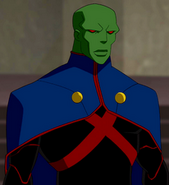 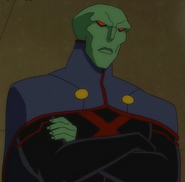 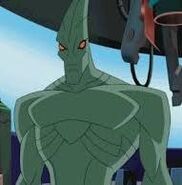 Miguel Ferrer
Justice League: The New Frontier
(2008)
Add a photo to this gallery 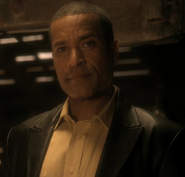 Retrieved from "https://superfriends.fandom.com/wiki/Martian_Manhunter?oldid=87926"
Community content is available under CC-BY-SA unless otherwise noted.