You may be looking for Martian Manhunter. 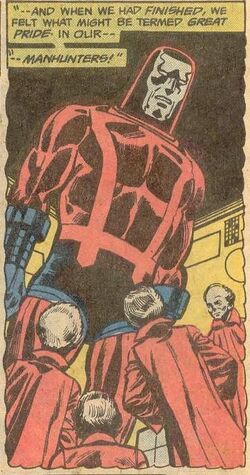 The Manhunters were the first attempt of the Guardians of the Universe to create an interstellar police force that would combat evil all over the galaxy. For thousands of years, they served the Guardians well. However, the Manhunters became obsessed with the act of hunting criminals. Their code, "No Man Escapes The Manhunters", became more important to them than seeing justice done.

The Manhunters' narrow view on justice lead to their program being compromised. The rogue Oan Krona reprogrammed the Manhunters to prove to the Guardians that there were flaws in an emotionless police force.[1]

Krona's reprogramming influenced the Manhunters into deciding that because all crime is the result of emotional responses, and all emotions come from organic life, then the solution on maintaining order in the universe was to remove all organic life from it. The Manhunters descended upon the worlds of Sector 666, slaughtering every organic being they came across into what became known as the ‘Massacre of Sector 666’.[2]

The Massacre lead to the Manhunters coming at odds with the Guardians and eventually conspiring to rebel against their masters. The Guardians, however, defeated and destroyed most of the Manhunters. Those that survived hid away on many planets, slowly rebuilding their forces and spreading their "beliefs" to other machines. Since then, the overriding goal of the Manhunters has been to take revenge on the Guardians, as well as on their replacements, the Green Lantern Corps.[3]

The Manhunters were discovered by the Justice League who seemingly defeated the Manhunter's leader, the Grandmaster.[4] One of their human pawns, Mark Shaw, adopted a new identity as the costumed hero, the Privateer.[5] However, he was later discovered to be a criminal posing as a hero.

Retrieved from "https://superfriends.fandom.com/wiki/Manhunters?oldid=69157"
Community content is available under CC-BY-SA unless otherwise noted.