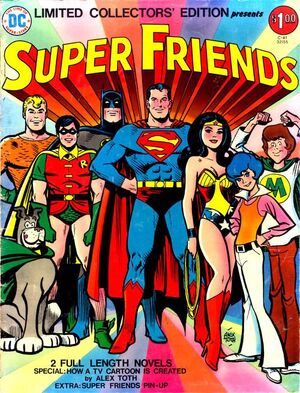 This edition is quite unique, in that it features two Justice League of America (1961—1986) reprints. It also comes with a wrap-around sequence, set in the Hall of Justice, which is drawn by Alex Toth!

Wendy and Marvin Meet the JLA

It opens with Wendy, Marvin and Robin entering the Hall of Justice.

While in the Hall of Justice, the kids are surprised to meet up with the core Justice Leaguers, who show them trophies and figures of their allies and enemies. Marvin tries on Green Arrow’s old archer outfit.

The story then shifts to the first reprint, which is about all the Justice Leaguers, posing as Green Arrow to help foil a plot by a group of supervillains.

After that first story is over, we catch back up with the SuperFriends as they continue their tour for Wendy and Marvin. They show them more wax figures of superheroes, who have helped out the SuperFriends ‘from time to time.’

In the second reprint, we see the Justice Leaguers taking on the supervillain Brain Storm.

The wrap-around sequence ends with Marvin daydreaming about being various superheroes.

During the most recent meeting of the Justice League of America, the Green Arrow stuns the group with the revelation that he is quitting the team and giving up his identity of Green Arrow and warns the rest of the team to do the same, although he does not explain why. Suspicious over a threat on the Green Arrow's life, Martian Manhunter, Flash, Superman, Aquaman, Atom, Hawkman, Green Lantern and Batman decide to secretly learn what threat Green Arrow is talking about by taking on his guise -- all except for Wonder Woman, who tries to pose as Green Arrow, but realizes that she could hardly pass for the Emerald Archer. Batman, disguised as Green Arrow and modifying his Batmobile to look like the Arrowcar drives about Gotham City when he happens upon the Penguin leaving the scene of a robbery. Attacking his old foe, Batman is easily defeated by his enemy, who magically changes his appearance to look like Green Arrow, while Batman himself is changed into the Penguin and is arrested. The same happens to Martian Manhunter when he tries to stop Dr. Light, Superman tackles Lex Luthor, the Green Lantern against the Tattooed Man, Aquaman against Cutlass Charlie, the Flash against Captain Boomerang, and Hawkman against I.Q.

Suspecting what is going on all along, Green Arrow decides to trail the Atom because he is the only one that hasn't been "switched" with a foe and incarcerated. When the Atom confronts Jason Woodrue as "Green Arrow" the crook tries to do the same thing, however Oliver Queen is on sight to knock him out. Shortly after, the imprisoned JLAer's suddenly change back to their normal forms and are freed from jail. Answering a call to JLA headquarters, they arrive to find Green Arrow with Dr. Destiny in his custody. Green Arrow explains how Destiny tried to infiltrate the JLA headquarters by posing as the Green Arrow using his Materioptikon to make himself appear as Green Arrow and the Arrow to appear as Destiny and get arrested. However, the effects soon wore off and Green Arrow rushed to JLA headquarters and realized that perhaps one of the members was really Destiny in disguise and so he set about this whole chain of events to try and capture Destiny.

Reviving, Destiny boasts that he has an ace up his sleeve: While he was using Materioptikon duplicates against the JLA at first, he had stashed and hidden the REAL villains in their headquarters and unleashes them on the JLA. The Justice League find themselves evenly matched against their regular foes, but turn it around against the crooks when they switch opponents and easily defeat all the criminals. After the battle is over, the criminals are turned over to the police and they revive in jail with no memory of the location of the Justice Leagues headquarters.

Story #2: The Case of the Disabled Justice League

In order to boost the spirits of a number of disabled children, the Batman, Superman, Hawkman, Green Lantern, Flash and Green Arrow decide to put on a mock battle for the boys, using Green Lantern's power ring to change Batman into a giant monster to fight.

While the boys watch on a TV screen created by the Green Lantern, they are suddenly shocked to see that each of the JLA members fighting has been struck by a disability: Superman is made blind, Flash's legs are fused together, Green Arrow suddenly has no arms, Green Lantern begins to stutter both literally and mentally, and Hawkman develops breathing problems. In spite of these handicaps, the JLA manage to defeat the monster which changes back to Batman after, who is rendered unconscious.

Realizing the cause is their foe Brain Storm, the JLA decide to not change back their disabilities with Green Lantern's power ring, and stop Storm with their various handicaps to show the children that they can overcome adversity. The JLA track down Brain Storm who has just busted his brother Fred out of jail, and are able to defeat him with relative ease. After the battle, Brain Storm restores all the JLA members back to normal.

However, as they are bringing Brain Storm and his brother into custody, Brain Storm uses his powers to make all the Superman and the others his slaves and duplicates of himself. When the other JLA members revive Batman they go after the army of Brain Storms. Switching between forms of the various Justice League members in Brain Storm's thrall, Batman singles out each member by seeing which members flinch at their actual weaknesses or have the best handle over their power. Finally determining which foe is the real Brain Storm, Batman knocks him out, relinquishing his control over the JLA members.

After Brain Storm and his brother are turned over to the police, the JLA add an addition to their charter to respect those with handicaps and treat them as equals.