Lilith is a young lady with 'untapped powers' of E.S.P. (Extra Sensory Perception). Her curiosity about her origin and the source of her power drives her ahead.

In the parallel-universe of Earth-One, a young girl named Lilly’s mental powers began to manifest themselves. At thirteen, she helped the local town-folk find a missing boy and his dog. She soon found herself reading her foster parents’ minds, discovering she was adopted. Upon learning this, using her newly found powers, ran several miles to the county orphanage where she was left. Miss Hardin convinced her that her new parents loved her. About this time, her foster parent’s showed up to take her home.[2]

A few years later, she ran away from home embarking on a journey to find her true origins, Lilith dabbled in showbiz as a seer, encountered many dead ends, and became the object of scorn. Many people grew fearful of her powers and accused her of being a witch due to her extra-sensory abilities.[3]

Her travels eventually took her to New York, where she took a job as a go-go dancer at the Canary Cottage disco. It was also during this time that she encountered wealthy philanthropist and friend of Bruce Wayne, Loren Jupiter and began to aid his cause. The well-meaning billionaire had started a secret training project for teenagers in an effort to help create a better world. On one occasion, when the Titans were relaxing in the Canary Cottage disco in their civilian guises, Lilith approached them and asked to join the Teen Titans. Lilith also warned them of an upcoming incident involving pacifist Arthur Swenson. The Titans were both shocked and mistrustful, but Lilith’s premonition came to pass, and the Teen Titans were unable to prevent Arthur Swenson’s death. Feeling ashamed, The Teen Titans encountered Lilith again. She introduced them to Mr. Jupiter, who invited the teens to abandon their superhero guises and join his project. The Titans, with Lilith as a new member (except for Robin who decided to go to college and work with the SuperFriends), accepted Jupiter’s offer.[4]

During this time, she briefly dated one of her team members, Don Hall (aka Dove) before starting a relationship with Gnarrk.

After a series of adventures both super-heroic and supernatural, this incarnation of the Titans disbanded, as members elected to pursue school and other interests. Loren Jupiter closed shop on his youth program, prompting Lilith’s move to the West Coast. But when Mr. Esper used his Mental helmet to cause disasters in California, Lilith helped organize a West Coast branch of the Teen Titans to stop him. Dubbed Titans West, its members included Lilith, Beast Boy, Golden Eagle, Hawk and Dove. The crisis united Titans West with the just-reorganized East Coast Teen Titans, as both teams defeated Mr. Esper, who was causing double damage in New York as Captain Calamity.[5]

Lilith did not appear in any episodes of the Superfriends. 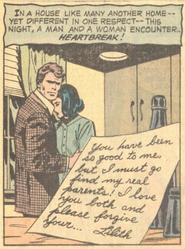 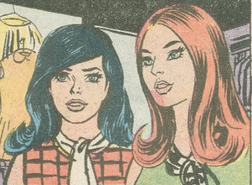 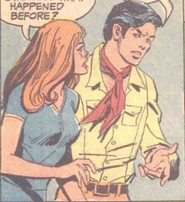 Dick and Lilith
Add a photo to this gallery

Retrieved from "https://superfriends.fandom.com/wiki/Lilith_Clay?oldid=89628"
Community content is available under CC-BY-SA unless otherwise noted.