Lex Luthor was Superman's arch-nemesis and Earth's leading supervillain. He was generally the leader and usually the brains of the Legion of Doom.

Luthor occasionally sported a power suit that made him much more of a physical threat to the SuperFriends.

He was also the most frequent opponent of the Justice League, returning again and again more times than any other villain.

Lex grew up on a farm in Smallville. He was good friends with Superboy. He aspired to be the greatest scientist in the world. He had a shack where he did experiments and had a small shrine to Superboy with posters. One day, he saved Superboy's life by getting rid of a Kryptonite meteoroid which had just landed and was harming Superboy.

Superboy saw this shack and the shrine and decided to pay back Lex Luthor for saving his life. Superboy quickly flew many places, acquiring building materials, and rapidly upgraded the shack into a modern labratory. Lex was grateful, and decided to see if was something he could do for Superboy. Using a piece of the Kryptonite meteor he got away from Superboy earlier, he discovered a chemical which could be used as a serum against Kryptonite, which would effectively make Superboy invulnerable. Lex had just perfected it when a fire broke out in the lab.

Superboy sees this and without checking inside uses his superbreath to blow out the fire. The vapors were blown onto Lex, causing his hair to fall out. This of course was an accident, but nevertheless, Luthor held a grudge against Superboy, and vowed that one day he would kill him, and he believed that he caused him to lose his hair deliberately, because he was jealous of his genius.[4][5] 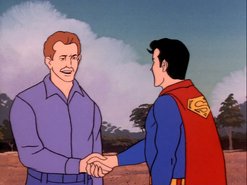 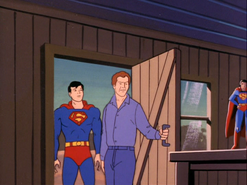 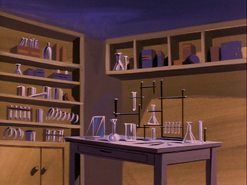 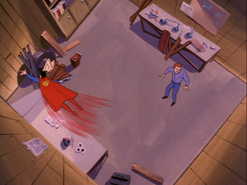 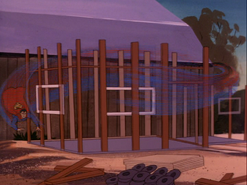 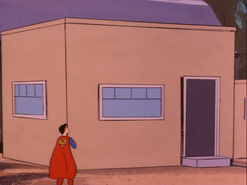 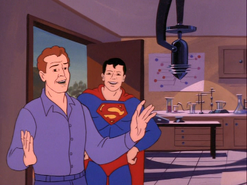 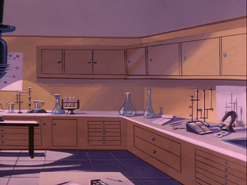 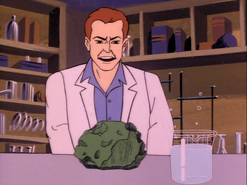 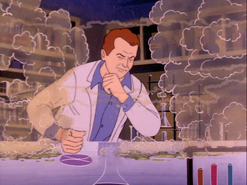 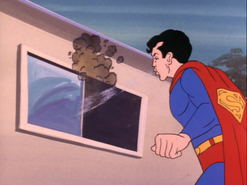 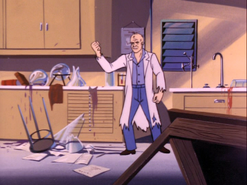 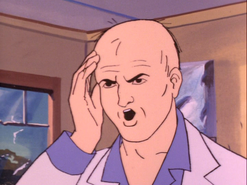 In one of his earlier capers, Luthor uses a time machine to contact the wizard Merlin in the past, and he tricked him with supplying him with magic marbles. Luthor later poses as a famous professor and tricked Perry White and Jimmy Olsen into placing themselves into danger so he could zap Superman with his kryptonite laser. Superman however used a lead shield and captured Luthor. Luthor later teamed up with the Warlock, Toyman, and Prankster to form the Allied Perpetrators of Evil and try to kill Superman with another Kryptonite laser.

Luthor later captured Jimmy Olsen again as a trap for Superman. When he came Luthor and his henchmen opened fire on him with kryptonite ray guns and cause him to get covered in lead paint which enables him to defeat Luthor again. Luthor laters rejoins the Allied Perpetrators of Evil and tries to destroy this device which alerts people of crime. Lex later traps Jimmy using a Matter Transfer device. In the end he is once again defeated. Lex later kidnaps Jimmy again and places him inside of a blimp to distract Superman so he can shoot him with kryptonite fireworks. Luthor later kidnaps Lois and Jimmy and flies them to the moon where he aims a laser at Earh and threatened to destroy arctics white ice cap unless he ges control over the world. Superman arrived to the moon however and saved Lois and Jimmy. Lex escaped however and teamed up with Braniac kill Superman with kryptonite gas. Luthor later pretened to reform while secretly planning revenge on superman but in the end was defeated. Lex later tried to use these aliens which could destroy anything that they touched to detroy Superman. Superman proved to be resistant to there touch so Luthor tried to kill him with kryptonite which once again failed.

In the mid 70's Luthor would form the Supervillain team, the Legion of Doom.[6] By 1979, the Legion had been disbanded. Luthor was doing time at the Metropolis State Prison.[7] Sometime this year, Luthor broke out of prison with help of his sidekick Orville Gump.

By 1984, he was still in hiding. He built a Warsuit which would allow him to fight the Superfriends face to face. At the same time, he was collaborating with Darkseid to destroy the Superfriends. He captured a few of them and then revealed to have made a device which can steal the Superfriends powers and give to someone else. He then used it a gave the powers to himself and betrayed Darkseid. Unfortunately, he got their weaknesses too, which was used against him by Darkseid when he was exposed to kryptonite. Luckily he was able to use El Dorado's telepathic powers to give the Superfriends his suit which helps them to escape. Despite the fact that he helped them he still went to jail.

He later shrunk the Hall of Justice while the junior members were in it. Despite being Junior members, they defeated Lex once more. Lex later discovered that this boy had all of this info on the Superfriends and stole and used it to trap them.[8]

In 1985, Lex built a giant spider and battled the Super Powers Team but was defeated by Cyborg.[9] He later escaped from prison, and the Justice League crime computer revealed that he was still at large.[10]

By 1988, Lex Luthor is a reformed criminal in the public eye. He now operates his criminal career under a more secret and safe environment, under the protection of his business at LexCorp, and he is now highly respected, except by those who knew him well before, such as Superman and Lois Lane. Due to his reformed image in the public eye, he had seemingly discontinued use of his Warsuit and ceased attacking Superman directly, instead taking a "behind-the-scenes" role in his plots against the Man of Steel and using his newly acquired wealth and influence to ensure that he cannot be directly linked to the crimes; Despite this, he began wearing a ring with a Kryptonite stone as a means of defending himself should Superman ever attempt to attack him, although it can only be used at close range as the stone is much smaller than most Kryptonite fragments that Superman encounters. Although he gives the public image as a legitimate businessman, his main goal hasn't changed: To humiliate and destroy Superman.[11] Luthor has sometimes used his business to find ways to make Superman unneccesary, such as creating robots that would fight crime and save people in danger which have greater capabilities than Superman. Sometimes in this "new image" Luthor will still try his old ways, such as intercepting a military train transporting gold to Fort Knox.

Retrieved from "https://superfriends.fandom.com/wiki/Lex_Luthor?oldid=99426"
Community content is available under CC-BY-SA unless otherwise noted.