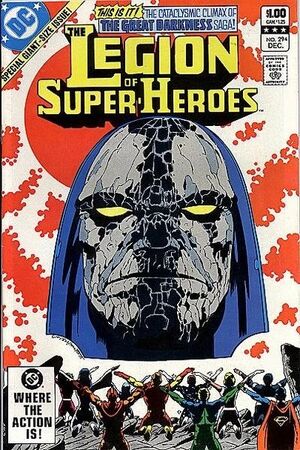 This comic was a DC comic book that featured one story featuring the Legion of Super-Heroes battling against Darkseid. It was the fifth and final part of a five part story.

In 2010, it was again reprinted in the trade paperback of Great Darkness Saga.

Darkseid's army of the entire population of Daxam, mesmerized by his power, runs rampant throughout the universe, each of them with powers equivalent to Superman's. The Legion calls in all of its members, including Superboy and reservist Supergirl, to battle the menace. It also calls on the aid of Dev-Em, the Legion of Substitute Heroes, the Wanderers, and the Superheroes of Lallor. Finally, Element Lad defeats the Daxamites by altering part of the atmosphere to lead, and the White Witch teleports them back to Daxam and removes Darkseid's spell, with the help of the child who has rapidly evolved into Highfather. Highfather converts Darkseid's dark Orion-clone into a duplicate of Orion himself, who fights Darkseid and is killed. Highfather also empowers Superboy and Supergirl to lead the fight against Darkseid, which they wage valiantly. But the villain's incredible power cannot be matched by the Legionnaires. Just as they are on the brink of defeat, the Daxamites approach Earth en masse, ready to attack Darkseid with powers even he cannot match. Darkseid breaks off the battle, tells the Legionnaires they have won for the moment, and teleports away. In the aftermath, the White Witch joins the Legion, Light Lass quits, and Brainiac 5 tells Supergirl he is finally over his crush on her. Kara, before she leaves for the 20th Century, remarks that that is a pity, since she was beginning to notice how cute he was.

Retrieved from "https://superfriends.fandom.com/wiki/Legion_of_Super-Heroes_Vol_2_294?oldid=76468"
Community content is available under CC-BY-SA unless otherwise noted.