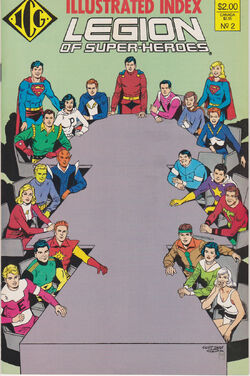 The Legion of Super-Heroes are a team of super-powered individuals from a number of different alien worlds, active in the 30th century. They protect the United Planets from crime and injustice, as well as threats both internal and external. They once time traveled back in time to Clark Kent's early years in Smallville, and recruited the young hero to help them on a few adventures (this young hero would later grow up to become Superman and a founding inspiration for the Legion).

In the parallel-universe of Earth-One, in the 30th century, a young Garth Ranzz is on his home-world, planet Winath. He is boarding a transport ship to Earth to find his brother, Mekt Ranzz. As he boards the ship, he meets Rokk Krinn, a native of Braal. As the two chat, they pass Saturn and another transport ship. Here they pick up Imra Ardeen, a cute blonde whom Garth would like to meet. Soon the craft lands on earth at Metropolis Spaceport. As they depart, someone attempts to assassinate fellow passenger, R.J. Brande - a prominent and wealthy business man, known throughout the Galaxy. The two boys prevent the crime and save Mr. Brande. The criminals will not say who hired them, but Irma is able to read their minds and provide Mr. Brande the reason for the attempt on his life. In gratitude, he invites them to his office the next morning. He tells them that they should join together to fight crime and injustice and that he would bankroll the organization. They give pause, stating that they are just teenagers. He proceeds to tell them about the teenage Superman (aka Superboy) and his cousin Supergirl and how they both fought crime in their teens. They agree. He sends them to the tailor for new uniforms and gives them their superhero aliases: Rokk is named Cosmic Boy, Garth is named Lightning Lad and Imra is named Saturn Girl. They form guidelines and secure a secret HQ they call the ‘Clubhouse’. As the Legion of Super-Heroes is formed, news of their adventures reaches many planets. Their first new member is Luornu Durgo, (aka Triplicate Girl). The next member to seek them out was Tinya Wazzo (aka Phantom Girl) from the 4th dimensional planet, Bgztl. And their roster continued to expand.[1]

Not long after the Legions formation with Mr. Brande, the Legion had their first big inter-galactic adventure, when they time-travel during a conflict between the Metropolis' Time Institute and the Guardians of the Universe from the planet Oa. The Legion (Cosmic-Boy, Saturn Girl, Lightning Lad, Colossal Boy and Triplicate Girl) heads to the Time Institute because the police channel said there was a fire. Upon arrival, a scientist, Circadia Senius tells them that in attempt to view the earth’s past, a bolt of lightning knocked out the equipment and caused the fire. As they attempt again to view the past, they are interrupted by a holographic message from a Guardian and several Green Lanterns who were sent to destroy the institute. During the battle, Saturn Girl telepathically communicates with the Guardian, after which the Legionnaires are teleported to Oa. The Guardians tell the tale of Krona, a rogue Green Lantern who defied the edict to not view the creation of the universe. As he did so, he was struck down by a mysterious bolt of lightning.[2] The Guardians explain that such attempts bring chaos to order and are deemed dangerous to their very existence. They agree to leave the matter, provided the Legionnaires no longer quest the origin of all things. They are then sent back to earth with two Green Lanterns who help undo the damage from the battle. As they complete their task, one of the Green Lanterns head back to his sector, while Vidar stays behind. Cosmic Boy, Lightning Lad and Saturn Girl are eager to be the first to fly in the prototype Time-Bubble. They want to travel back in time to see their heroes, Superboy and Supergirl. Circadia sends them on their way. The Time-Bubble malfunctions and they return back to their time to find that Vidra has gone rogue and is at the controls to the Time Institute seeking the origin of the universe. They defeat him and send him back to Oa.[3]

Our three co-founders (Lightning Lad, Saturn Girl, and Cosmic Boy) are finally able to time-travel via the time bubble to the past to meet their inspiration, Superboy. They bring him to the future and show him Earth, 1,000 years in the future. After a series of adventures, Superboy was awarded membership and returned to his own time.[4]

Lightning Boy, Saturn Girl, and Cosmic Boy time-travels again to earths past. This time, it is not to see Superboy, it is to see his cousin Supergirl. While in disguise as Linda Lee, Supergirl is visited by three teens who happen to know her secret identity. They reveal their identity as fellow-heroes, but from the future. Supergirl, then recalls her cousin telling her of his induction into the Legion when he was Superboy.[5] Supergirl and the Legion form a bond, which only grows over the years. She would soon meet Brainiac 5 at his induction into the Legion. They soon develop romantic feelings for each other.[6]

On one occasion, both the JLA (from Earth's past) and the JSA (from Earth-Two) are hurled into the future, to the 30th century. They team up with the Legionnaires to defeat with evil wizard,Mordru and the 'Demons Three'.[7]

Retrieved from "https://superfriends.fandom.com/wiki/Legion_of_Super-Heroes?oldid=89139"
Community content is available under CC-BY-SA unless otherwise noted.