View source
The Legion of Doom 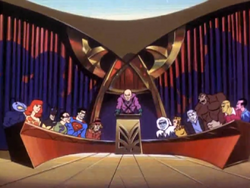 The Hall of Doom was mobile, lowered below or raised above the swamp water's surface, and often flown through the air via rockets if needed, even remotely controlled. It also had laser defense weapons and at times was altered to time travel to the past or future.[15]

The second incarnation of the Legion of Doom had a Domed Retreat at Hidden Island.[16]