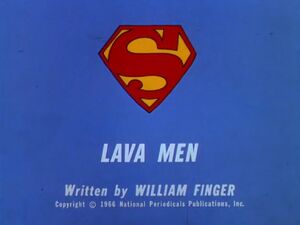 Lava Men is an episode of The New Adventures of Superman.

A volcano erupts in the countryside in Mexico, and the lava flows dangerously toward a small town, while in Metropolis, Perry White informs Clark Kent over his desk radio that Lois just phoned in from Mexico, telling him about the town about to be buried in lava. Clark then sneaks off and changes into Superman, flies out the window and heads toward Mexico, he then passes an airplane and the airplane pilot and the co-pilot wonder what they saw in flight streaking by, one of them believed it might have been a meteor. But it was actually Superman.

At the village in Mexico, Lois Lane and the mayor of the village is watching as the citizens evacuate. Superman arrives in time to save the village. They mayor then rejoices over the sight of "Superhombre," as he calls him. Superman uses his herculean strength to tear the top of a mountain and he uses it to seal the volcano, like a cork in a bottle. He then digs a trench to redirect the lava flow away from the town and into the sea.

Back at the village, a young boy is talking to his mother, asking her if they will be okay. She then answers affirmatively and consoles him with a hug. Back at the lava, the lava takes on a somewhat humanoid shape, and a Lava Man is formed. It then starts to attack. Superman then punches the Lava Man, and it breaks into several pieces, and from it spawns several other Lava Men. They then surround Lois and Superman flies to her rescue and grabs her, moving her to a safe distance. Lois then tells him she hates to be a crybaby, but she was so scared. Superman tells her he doesn't blame her, as those Lava Men are obviously not friendly. The Lava Men then head toward the town, and Superman knows if he punches them, they'll just turn into more lava monsters. Lois tells him that they can't just let the town get turned into an inferno. So Superman decides to fly off toward the sea, and he spins around, creating a vaccuum, which starts to such up water. He then creates a waterspout, which follows him upward as he flies over the lava creatures. He then stops spinning, allowing the water to fall like a massive tidal wave, causing the lava men to revert back to normal non-living lava.

Back in the village, the mayor expresses his gratitude toward Superman. He then tells him he was just doing his job, and that he's got another job that he needs to tend to right away. He takes off into the sky.

Back at the Daily Planet in Metropolis, Perry White asks Clark Kent where "in blue blazes" he's been, and he asked if he was worried about Lois Lane. Clark tells him she'll be fine, because he heard about it through a "hot tip."

Retrieved from "https://superfriends.fandom.com/wiki/Lava_Men_(episode)?oldid=84192"
Community content is available under CC-BY-SA unless otherwise noted.