Katherine Kane is wealthy heiress who becomes inspired by the superhero Batman and chooses, like him, to put her wealth, experience and resources towards a war on crime as a masked vigilante in her home of Gotham City. This is partly out of altruism and partly to attract the romantic attentions of Batman.

In the parallel-universe of Earth-One, Kathy Kane was a wealthy Gotham City heiress who gained great acrobatic skills during her career as a circus trapeze artist and stunt cyclist. Becoming infatuated with the Batman, she fashioned herself a costume and secret hide-out and started operating as Batwoman. At first she upstaged Batman and his sidekick Robin in capturing crooks. However, Batman eventually learned her true identity and tracked her to her secret cave hide-out. Showing her how easily it was for him to learn her identity, Batman pointed out that criminals could probably do it just as easily and tried to convince her to drop out of crime fighting.[3] Disobeying Batman's advice, she tried to capture mobster Curt Briggs. During this caper, Batman went missing and Briggs, struck with amnesia, left thinking he was Batman. Ultimately the real Batman reappeared, and Biggs was turned over to the police. Afterwards, Batwoman decided to step out of the limelight for a while.[4]

Tired of the dull life of a rich heiress, Kathy put on the mask on handful of occasions to fight crime.[5] When both Batwoman and reporter Vicki Vale were nominated Gotham City’s ‘Woman of the Year’, both tried to upstage each other to get the lead in the contest. With the help of Batman and Robin, both Vicki and Batwoman captured Moose Molloy's gang and both were crowned woman of the year.[6]

After this, Batwoman helped the Dynamic Duo fight crime on several occasions.[7] Batwoman later meets Bat-Mite. Together, they captured some crooks to save the Dynamic Duo.[8] After this adventure, Bat-Mite became infatuated with her and tried to become her sidekick, creating chaos for everyone until he realized his mistake.[9]

After a few more adventures as Batwoman,[10] Kathy's niece Betty Kane came to visit her, the young girl learned of her aunt's double identity. Kathy agreed to train Betty to be her sidekick, thinking that the young girl would eventually lose interest. However, to her surprise, Betty proved capable and became Batwoman's sidekick Bat-Girl.[11]

Over the next few years, Kathy donned the Batwoman suit on several occasions becoming the victim of Luthor's experiments, meeting Superman,[12] having many adventures, some with Bat-Girl and having an ‘on-again’ ‘off-again’ relationship with Bruce Wayne.[13]

After a few years, Batwoman went into retirement and disappeared from Batman's life almost entirely. She becomes the owner of Kolossal Carnival.

About 8 years later, in the Spring of 77', she came out of retirement to aid Barbara Gordon aka Batgirl against the Killer Moth and the Cavalier. This return was never intended to be permanent.[14] That summer, Kathy is a co-host on a telethon hosted by Justice League and the SuperFriends. Her act included her acrobatic team, the 'Dare Devils'.[15] Later that year, Kathy virtually disintegrates on Barbara Gordon's front steps, she and Robin team up to find the cure and restore Batwoman to her normal form.[16] Shortly after this, Batwoman met Helena Wayne[17] aka the Huntress from Earth-Two.[18]

Sadly, not long after this adventure, Kathy Kane was murdered by the League of Assassins who were being manipulated by Ra's al Ghul. Her death was eventually avenged by Batman.[20] 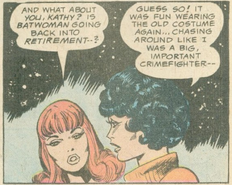 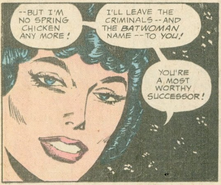 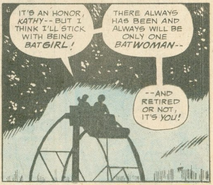 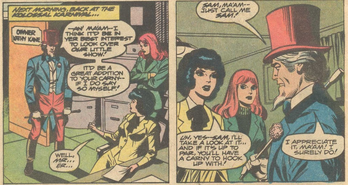 Kathy did not appear in any episodes of the Superfriends.

Retrieved from "https://superfriends.fandom.com/wiki/Katherine_Kane?oldid=68954"
Community content is available under CC-BY-SA unless otherwise noted.