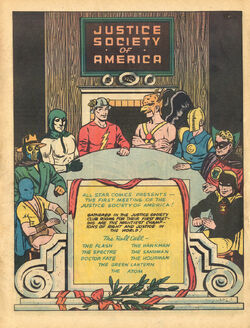 In the parallel universe of Earth-Two (Earth-2A in the SuperFriends Universe), the Justice Society of America (JSA) are the premier protectors of the universe.

In the parallel-universe of Earth-2A, in late 1940 German Chancellor Adolf Hitler acquired a powerful mystic weapon known as the Spear of Destiny.[1] With it, he intended on manipulating its power to dominate all of Europe. A British officer named Smythe (Chief of British Security Coordination) learned of Hitler's plans and informed American president, Franklin Delano Roosevelt. Roosevelt, pressured by Congress to maintain an isolationist stance, refused to openly involve the United States in England's war with Germany. Instead, recognizing that in the last few months, several costumed mystery-men have appeared across the U.S., he selected two of these costumed vigilantes from a top-secret dossier to use as civilian agents against Hitler's forces – the Flash and Green Lantern. A few days later, Gotham City Police Commissioner Gordon summoned Batman to his office and introduced him to Agent Smythe and to two fellow mystery-men, the Flash and Green Lantern. Batman was briefed and persuaded to be part of a covert strike force against Nazi operations in Europe. During the mission, Batman, the Flash and Green Lantern were captured. Meanwhile, a half a world away in Salem Massachusetts, Doctor Fate has observed these events in his crystal orb. He contacts the Hourman and together they head to Europe to save the costumed heroes. As they confront Hitler, he does some magical hoodoo with the Spear, and summoned forth from the stormy skies Valkyries! Nine of them! Doctor Fate and his fellow mystery-men pursue the Valkyries. At the same time, Hitler ordered his invasion fleet to set sail from Normandy. Perceiving the danger, Doctor Fate, sends a magical signal 6000 miles to the west, to summon reinforcements: the Sandman, Hawkman, the Atom and the Spectre. Fate's magic teleported the mystery-men to the 'White Cliffs of Dover'[2] were they assisted the British soldiers in fighting the Nazi hordes and their escorting Valkyries. After the battle migrated to American soil, and several hours of combat, our heroes began to despair. Soon, they spot Superman! Now frustrated, the Valkyries shift targets to the White House, with the intent of assassinating President Roosevelt. However, this proved futile, as our heroes were able to prevent the assignation and thwart Hitler’s plans. Soon after, the president suggested that the assembled heroes form a team, with a name suggested by Superman:[3] the Justice Society of America![4] Due to other commitments, Batman declined full membership status, and served only as an honorary member.[5] Superman was also considered an honorary member.[6]

By mid 1941, the JSA roster began to change and evolve. The Flash stepped down as team chairman, preferring instead an honorary position with the team as his duties in Keystone City became too great.[9] Johnny Thunder was officially inducted into the ranks, followed shortly by Doctor Mid-Nite (the blind Charles McNider) and Starman (Ted Knight).[10] The team's first female member, Wonder Woman (aka Diana Prince), joined as their secretary![11]

After the attack on Pearl Harbor on December 7, 1941, US President Roosevelt gathered all available superheroes and mystery-men and asked them to unite (if perhaps loosely) to battle sabotage and similar activity on the home front for the duration of the war. Calling themselves the All-Star Squadron, their activities were limited to the home front (confronting Axis metahumans who ventured onto Allied soil) so they could not fall under the influence of Adolf Hitler's Spear of Destiny. The President also re-christened the Justice Society as the Justice Battalion for the duration of the conflict. The team functioned as an extended arm of the All-Star Squadron, a massive assemblage of super-heroes dedicated towards preserving the ideals of democracy.[12] The first full meeting of the Squadron was in February of 1942.[13]

During the war, a few others joined the JSA: Mr. Terrific (Terry Sloane), Wildcat (Ted Grant),[14] the Black Canary (Dinah Lance)[15] and although she was never officially inducted as a member, Hawkgirl (Shiera Sanders) assisted the team on several missions.[16]

In 1951, several JSA members were summoned before the House un-American Affairs Committee (HUAC).[18] Based on a recent case, the HUAC concluded that the JSA had ties that ran contrary to American interests and demanded they reveal their identities and submit to Congressional interrogation. The Spectre vehemently argued on behalf of his colleagues, citing that without their secret identities, they would become targets for enemy agents across the globe. Unwilling to reveal their true faces, the Justice Society instead elected to formerly disband.[19] Wonder Woman (working with the U.S. Military), Superman, Batman and Robin however remained active fighting-crime and protecting the innocent wherever needed. Because of this, the public never lost faith in their heroes.

Almost twenty years later, the team returned to the public eye (many never stopped operating in the shadows) to uncover the reason behind a series of geological disasters that threatened to destroy the entire world. While working together, the Flash and Wildcat are aided by three younger heroes: Robin (Richard Grayson), the Star-Spangled Kid (Sylvester Pemberton), and a new hero named Power Girl (Kara Zor-L). At Power Girl's suggestion, these heroes became an auxiliary detachment of the JSA called the Super Squad.[20]