Start a Wiki
Justice League
From Another Planet 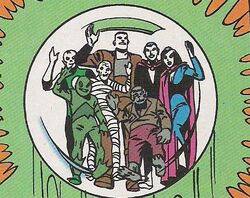 The Justice League of Another Planet was an extra-terrestrial superhero team from a world in a far away star system.

The Justice League of Another Planet was a team of superheroes from another planet deep in space.

The members of the team resembled the 'traditional movie monsters.' They met the Super Friends when they were trying to stop Char Ymat from possessing a power ring and power battery that belonged to a member the Green Lantern Corps.[1]

This team of superheroes also existed in this universe as well.

They apparently went by the name the Monster Society of America, implying that when they came to Earth, they stayed, and also they obviously must have settled in America, hence the name of their superhero team.[3]

The 'Justice League of Another Planet' did not appear on any episodes of the SuperFriends TV Show.

Their only appearance was in the Super Friends (comic book):

Retrieved from "https://superfriends.fandom.com/wiki/Justice_League_of_Another_Planet?oldid=87036"
Community content is available under CC-BY-SA unless otherwise noted.