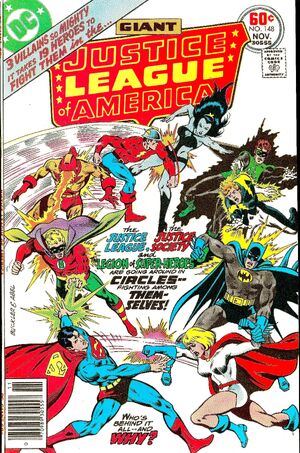 Part Three of a Four-Part Story.

Click here for Part One, Part Two and Part Four.

In the parallel-universe of Earth-One, with all three items recovered, Mordru unleashes three demons which have been imprisoned. The demons have taken possession of their mystical items, ensuring that they never have to be imprisoned again. When Mordru demanded their power, the Demons Three struck him down. They cause the heroes present to vanish except for Black Canary, and the Green Arrow. They are still trapped, having have been miniaturized, and cruelly placed within an hourglass that is rapidly filling with sand. Mordru, the evil sorcerer is wearing the hourglass like a trinket around his neck and holed up at the Legion Headquarters.

Our eight heroes that vanished are ok, being thrust backwards through time to the 20th century. Carried at super-speed across the time barrier are the Justice League heroes: Superman, Batman and Green Lantern; and the Justice Society heroes: Dr. Fate, Power Girl, Flash, Green Lantern and Hawkman. However, Black Canary and Green Lantern fear the worst not knowing what is happening.

The Demons Three begin to plan the conquering of Earth (once again). However, the Demons Three are, for the first time, at odds with how to move forward. Abnegazar wishes to become a part of humanity. Rath wishes to enslave humanity. Ghast wants to destroy the world. Realizing that they are no longer unified, they decide to use proxies to fight their war. So, the Demons Three try to enchant the remaining Legionnaires (Lightning Lad, Chameleon Boy, Shadow Lass, Wildfire and Princess Projectra to rally to their respective cause. It is naturally Abnegazar gains their sympathy. Ghast and Rath decided to pull our eight heroes they sent away forward through time to the year 2977.

Rath attempts to control Doctor Fate, and use his mystic power to enchant our five JSA heroes. When Doctor Fate resists, Rath instead uses the Earth-Two Flash's super-human speed to mesmerize the JSA. Ghast forces the Green Lantern of Earth-One to use his power ring to dominate his fellow JLA Heroes (Superman and Batman). As minions of war (proxies chosen to determine winner), the two teams converge on one another. The Legionnaires join the fight. As our heroes battle, it becomes clear to them that only their bodies are controlled. Not their minds. Wildfire blasts Superman out of the Legion headquarters, moving the fight out into the streets of Metropolis.

The JLA and the JLA, defeat the Legion of Super-Heroes.

Ghast teleports the Batman, and Superman to an unknown location. Rath tasks Doctor Fate, and the Green Lantern of Earth-Two with holding hostage the geologists that are tunneling through the Earth. They enter the North American entrance to the Global Tunnel (far from Metropolis) to find the geologists. The geologists are in Geolab 77, an inner-space station (lab).

Rath taps into Earth’s global television and orders the President of Earth to turn power over to him. If the president does not comply, he will collapse the global tunnel, murdering thousands of innocent people. Princess Projectra, and Wildfire, ambush Doctor Fate. With the global tunnel secure, Wildfire takes out the Green Lantern of Earth-Two, releasing the hostages in the Geolab. The Green Lantern of Earth-One struggles against Power Girl, as they fight, they realize that they still maintain some degree of free will. So when Wildfire arrives, they allow him to take them out.

Black Canary and Green Arrow join Batman and Superman. The Canary devises a strategy. All three teams appear to have a stalemate. No victor. The hope is that the Demons Three would have to engage each other directly without the use of proxies. Ghast interrupts their strategy session, sending them to destroy Ice City which is in the Antarctic. Batman has been given a bomb and a telepathic suggestion to detonate the bomb. Superman allows Shadow Lass, and Wildfire to take him out. The Batman is distracted by one of Princess Projectra's illusions, allowing Chameleon Boy to snatch a bomb away from him. Lightning Lad subdues the Batman, the Black Canary, and the Green Arrow. The Flash of Earth Two battles against Princess Projectra.

With a little unseen help from Superman, Princess Projectra is able to create a stalemate with the Flash from Earth-Two. The Hawkman from Earth-Two battles against Chameleon Boy. Unseen by all, the Black Canary detonates the bomb in space, with a sonic cry. Adopting the Hawkman from Earth-Two’s form, Chameleon Boy fights the Winged Wonder to a stalemate. Angered at their proxies' inability to claim victory, Abnegazar and Rath turn on one another. Abnegazar and Rath destroy one another, in a mystic explosion which Doctor Fate is able to absorb. The JLA, the JSA, and the Legionnaires then set their sight on destroying Ghast.

As they all engage the demon, Doctor Fate uses his amplified mystic powers to draw the shattered pieces of the JLA’s satellite headquarters back together, entombing Ghast inside. Lingering residue from the Red Jar of Calythos, the Green Bell of Uthool, and the Silver Wheel of Nyorlath, within the JLA’s trophy room, proves enough to imprison Ghast inside the satellite. With the crisis passed, the JLA and the JSA, return to their proper place in space, and time.

Retrieved from "https://superfriends.fandom.com/wiki/Justice_League_of_America,_Vol._1_148?oldid=89840"
Community content is available under CC-BY-SA unless otherwise noted.