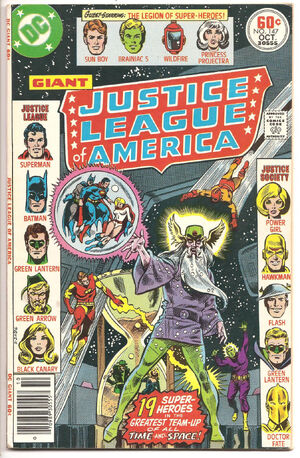 Part Two of a Four-Part Story.

Click here for Part One, Part Three and Part Four.

Crisis in the 30th Century!

In the parallel-universe of Earth-One, 22,300 miles over the Earth at the JL Satellite HQ, the Justice Society of America from Earth-Two is celebrating with the Justice League of America following their battle against the Psycho-Pirate.[1]

As the JSA prepares to extradite the Psycho-Pirate back to Earth-Two, they are halted by the Green Arrow of Earth-One. He angrily shuts down the inter-dimensional transporter (a transmatter cube that can teleport them to any parallel universe) cause its interrupting their party. Wildcat from Earth-Two takes issue, cause the inter-dimensional transporter takes an hour to warm back up. So the two begin to go at it (it is unclear if the Psycho-Pirate is at work here). Power Girl, however, is delighted to stay, as she is quite taken with Earth-One’s younger Superman. And Kal-El says that she’s nothing like his cousin (and Earth-One counterpart), Supergirl. As he escorts her to the JLA’s trophy room, they are attacked by a massive, disembodied hand. The JLA and the JSA rush to the aid of the Kryptonians. The hand blindly gropes about, randomly grasping five members from each of the two teams, leaving the other heroes behind.

The ten heroes begin an incredible odyssey through space and time! Carried at super-speed across the time barrier are the JLA heroes: Superman, Batman, Green Lantern, Green Arrow and the Black Canary; and the JSA heroes: Dr. Fate, Power Girl, Flash, Green Lantern and Hawkman.

They are transported a 1,000 years into the future, to the year 2977 by Mordru the evil wizard, arch-foe of Earth-One’s future super hero team, Legion of Super-Heroes. He is displeased with his abduction of the heroes as the object of his capture was not the heroes but three mystic artifacts from the JLA Trophy Room, the Red Jar of Calythos, the Green Bell of Uthool and the Silver Wheel of Nyorlath. Having no use for either group of heroes, Mordru imprisons them, as he has already done to the Legion of Super-Heroes. After a brief uprising led by Doctor Fate, both Green Lanterns and the other heroes, Mordru is able to overpower them, and imprison them once again, this time in the ‘Golden Globe of Transkalla’ (an impenetrable globe).

Mordru then turns his attention to another globe, where five Legionnaires (Saturn Girl, Lightning Lad, Shadow Lass, Ultra Boy and Chameleon Boy) are being held prisoner. He admonishes them because their four comrades, who were sent to fetch the ‘Bell’ and ‘Wheel’ in his century, have not returned. Influenced by Doctor Fate's spell of suggestion, Mordru, who is feeling fatigued, decides to not kill the heroes and instead tasks the JLA, and the JSA, with retrieving the three mystic items. Mordru tells them he will communicate his plans telepathically and sends them away. He keeps the Green Arrow and the Black Canary as colateral, along with the half dozen Legionnaires he is already holding. He places Green Arrow and Canary in a mystic hourglass, the Legionnaires in another and tells the heroes that if they fail to retrieve the artifacts before the sands of time run their fellow heroes will be put to death!

The Black Canary chimes in and says that if she is going to die, she demand to know why. Mordru tells the tale of the famed ‘Three Demons’: Abnegazar, Rath, and Ghast. And how they ruled this planet eons ago … before the age of humankind. But altruistic aliens known as the ‘Timeless Ones’ overthrew the demonic trio in order to save the embyonic humanity. However, before their imprisonment, the demons created the indestructible ‘Bell’, ‘Jar’ and ‘Wheel to ensure that they would one day be released.’ The Timeless Ones could not destroy the objects, so they hid them. That is, until Felix Faust manipulated the JLA into digging them up.[2] Green Lantern chimes and says that JLA was able to defeat Faust and the demons, and that Green lantern locked them up in ‘power-ringed cells.’ The three objects were then stowed away in the JLA trophy Room. The Canary asks, “why reach back to 1977”? Mordru reveals that at some point during the last thousand years, the satellite headquarters of the JLA was destroyed. The three mystic items (along with everything in the JLA HQ) were blown into space. The ‘Jar’ fell to earth, and the other relics were flung across the cosmos. He then tells them that upon their discovery, he sent the Legionnaires to recover them. When that venture failed, he reached back in time to gather them himself.

The first of our heroes are arriving on Planet Antares-II. The 'Wheel' landed here a century ago, altering the destiny of the entire world. In the present, Legionnaires, Sun Boy and Wildfire have been captured. This is a ruse of course, as these two heroes could easily escape. Superman of Earth-One (aka Earth-1A), and Dr. Fate, and Hawkman of Earth-Two (aka Earth-2A) rescue Sun Boy and Wildfire, and secure the Silver Wheel by pretending that the ‘Wheel’ has transformed into a constellation of multi-hued stars (the Antarians had come to worship the Wheel, so the only way to take the Wheel was to pretend it had changed).

Elsewhere, the Batman of Earth-One (aka Earth-1A), and the two Green Lanterns have journeyed to the Planet Vaxon. The upper atmosphere of Vaxon is filled with dragons (Batman called them Whatsises). The sound of the Green Bell of Uthool seems to be keeping the dragons at bay. On the surface of Vaxon, Brainiac 5, and Princess Projectra, plead with the ruling council to relinquish the ‘Green Bell’. The Vaxonian council refuses because the Green Bell is the only thing keeping the dragons from attacking the populace. The Batman proposes creating a scarecrow. Working from Princess Projectra's cast illusion, the Green Lanterns carve a bas-relief of the dragon's natural predator, the Xanthor, on one of Vaxon's continental land masses. The dragons depart in terror. A grateful ruling council relinquishes the Green Bell of Uthool.

Meanwhile, Power Girl and the Flash of Earth-Two (aka Earth-2A) must open a rift in space to retrieve the Red Jar of Calythos. Power Girl wants to understand why they here, if the ‘Jar’ fell to earth. The Flash tells her that the Legionnaires found the ‘Jar’ and determined it was too dangerous for them to have, so they teleported it here. A place they could not even retrieve it. But the Flash knows that only his ‘vibratory powers’ can open the dimensional gateway. The extra-dimensional pocket is teaming with brooding, amphibious creatures. While the Flash keeps the portal open, Power Girl enters the pocket. Threatened by Power Girl's presence, the creatures attack. One of the creatures has mistaken the vault holding the ‘Red Jar’for it's egg. Power Girl brings the creature's actual egg to it. Power Girl cracks open the vault, and retrieves the ‘Red Jar’.

Mordru draws the three teams of heroes back to him, and imprisons them once again. The Flash of Earth-Two (aka Earth-2A) escapes imprisonment with the ‘Red Jar’ in his possession. He attempts to negotiate the release of the prisoners for the ‘Red Jar’. Mordru complies, and releases the heroes, but reminds them that he still has the Green Arrow and the Canary as prisoners. The Heroes back off their attempt to overpower Mordru and helpless watch as he initiates the ritual to release the Demons Three. He asks the Demons Three to kill the 20th Century heroes.

The Demons Three refuse to grant power to Mordru, opting instead to strike him down. With the mystic items in their possession, the Demons Three can never be imprisoned again. The Black Canary, and the Green Arrow, are still trapped inside Mordru's hourglass … that is almost entirely filled with sand!

Story #2: 'A Bridge Between Earths'

Retrieved from "https://superfriends.fandom.com/wiki/Justice_League_of_America,_Vol._1_147?oldid=67884"
Community content is available under CC-BY-SA unless otherwise noted.