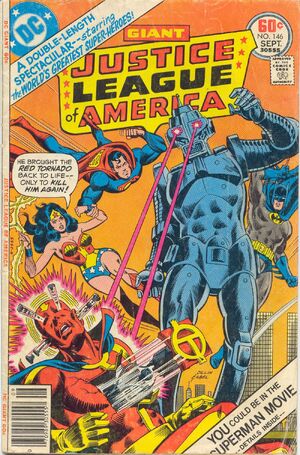 The Hawkman, and the Hawkgirl, subdue the Red Tornado. The consciousness animating the Red Tornado's body departs, leaving behind the lifeless shell of the Red Tornado. The JLA suspect the involvement of the Construct. Wonder Woman suggests that the Construct could be using the Red Tornados body as an automaton the same way she was.[1] In response, Hawkman states that this is total war and that we need everyone to win it, proposes that the Hawkgirl be granted membership in the JLA. Superman states the team's by-laws, wherein prospective new members cannot duplicate existing members powers or skills. The Hawkman threatens to resign from the team, unless the Hawkgirl is granted membership. The Phantom Stranger suggests tabling the discussion until the current crisis has been dealt with, and that half of them seek those who have encountered the Contruct and the other half follow Wonder Woman’s lead, then departs.

The JLA with the Hawkgirl, split into two teams, to mount their investigation. Unseen by the departing heroes, the Red Tornado's lifeless body stirs. The Batman, the Green Arrow, and Superman journey to Atlantis, to confer with Aquaman, and the Atom who are in an Atlantean War Room. As they discuss, the Construct III activates an Atlantean defensive cannon, and fires on the war room. With Superman protecting the JLA, Aquaman destroys the cannon. The Atom determines that the Construct is in Manhattan. The Red Tornado struggles to stand.

The Red Tornado returns to active status with the JLA and Hawkgirl is granted membership.

Retrieved from "https://superfriends.fandom.com/wiki/Justice_League_of_America,_146?oldid=69118"
Community content is available under CC-BY-SA unless otherwise noted.