When Marvin White and Wendy Harris were inside the Hall of Justice trying to figure out a way to locate the missing Justice League, that were kidnapped by Doctor Hiram Gulliver, they decided to get into the Amazon Princess's jet and see if they could fly it to her using their own head. This didn't work, because they don't have telepathic powers. Nevertheless Wonder Woman summoned the jet herself, and brought them along for the ride.[4]

Wonder Woman again used the Justice League Runway to takeoff the jet toward London, England; to try and keep a diamond at the Bank of London safe.[5]

The exact location of the Justice League Hangar wasn't entirely clear, but presumably it was very close to the Hall of Justice. This is implied by the fact that Marvin White and Wendy Harris seemed to go there on foot in a fairly short period of time, although this is merely conjecture.

It should also be noted that the hangar seemed to be located in an area with no other buildings around, possibly a rural area, which seems strange, since the Hall at that time was located in Downtown Gotham City.[6] 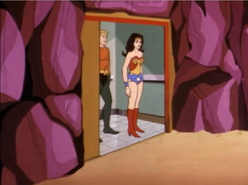 Entrance to Hanger from the Hall 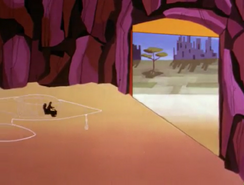 Exiting the Hanger
Add a photo to this gallery

Retrieved from "https://superfriends.fandom.com/wiki/Justice_League_Hangar?oldid=86047"
Community content is available under CC-BY-SA unless otherwise noted.