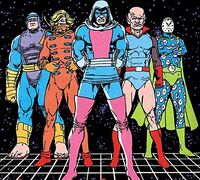 The team engaged the terrorists in battle and defeated them, but before they could steal the diamond, the authorities arrived. But the public's reaction to the arrival of the supervillains was welcomed, as they were viewed as heroes who had saved them from the terrorists. Major Disaster, the leader of the group, enjoyed his change of status as a hero, and he was inspired to join the Justice League. Their team then became a branch of the Justice League International, under the leadership of G'Nort.

Retrieved from "https://superfriends.fandom.com/wiki/Justice_League_Antarctica?oldid=87916"
Community content is available under CC-BY-SA unless otherwise noted.