Start a Wiki
The Junior Superfriends[1] were the super-heroes-in-training that worked with the Superfriends in an effort to become heroes in their own right.[2]

The Hall of Justice was their training academy.[3]

In the early 70's, a few years after the formation of the Justice League, the JLA entered a volunteer program to help train young people to become superheroes. And so, teenager Lucas Carr was the first 'Junior Member of the JLA' or more specifically, the first Junior SuperFriend Member. At this time the base of operations for the JLA was Happy Harbor, Rhode Island.

In the late 1960's, young Dick Grayson had taken on the role of Robin to the masked vigilante, Batman. Soon after, in the early 70's, Dick would establish himself as trainer to the new Jr. SuperFriends and part-time member of the newly formed Teen Titans.[4] It would appear however, that he preferred the company of the Justice League. Dick eventually graduated from high school and enrolled in Hudson University.[5]

Marvin White and Wendy Harris appeared both in the TV show and the first 7 issues of the comic book. They were always accompanied by Wonder Dog.[6] They often needed to be saved from the bad guys, they occasionally managed to save the Earth themselves! They defeated the World Beater, who had ambushed every other super-hero. They later met the Wonder Twins (Zan and Jayna, two shape shifting twins from the planet Exxor), and defeated Grax while the JLA and the future Global Guardians were battling his alien monsters.

Wendy was practical and intelligent. She is the niece of Harvey Harris, the private detective who taught Bruce Wayne almost everything he knows. When Wendy expressed an interest in super-heroics, Bruce had the Hall of Justice built in Gotham City.

After several years as a Junior SuperFriend, Wendy moved to Paradise Island to attend an Amazon university and continue her training.[7]

Marvin was well-meaning, but prone to falling into trouble. He is the son of Dan White and the original Diana Prince, who sold her identity to Wonder Woman when the princess first came to 'man's world'. Marvin named his pet Wonder Dog after the heroine. Wonder Woman made Marvin a Junior Super Friend.

After several years as a Junior SuperFriend, Marvin goes on to Ivy University, where fellow superhero Ray Palmer worked as a professor.[8]

A few years later, Marvin returned with Wendy to aid the new Junior SuperFriends, the Wonder Twins, posing as Zan's and Jayna's human disguises, "John" and "Joanna", to fool a criminal who had deduced the Wonder Twins' and Batman's secret identities.[9]

The Wonder Twins and Gleek

Zan and Jayna were twins born on Exor, the homeworld of Superman's old enemy, Grax. Their ancestors were of two races — ordinary humans and the shape-shifters. As time went on, both races intermarried and had children. The shape-shifting genes were not the dominant ones.

The Twins were born with the ability, but had a unique limitation. They had to touch before their powers could activate. Jayna could become any animal, and Zan could become any form of water. When their parents died in a worldwide plague, the twins were sold to an intergalactic circus. Because they were shifters, this was determined to be their only destiny.

They met Gleek, the elasti-monk, who was the pet of Illik. Frustrated that the other performers were paid for their services, the twins decided to take a rocketship in exchange for the wages that they should have earned. Gleek went with them.

While hiding from the authorities, the twins stumbled onto Grax, who was recording his plan to destroy the Earth with many bombs. The twins rushed to Earth to warn the people, and the Justice League. Meanwhile, Wendy, Marvin, and Wonder Dog defeated Grax after he attacked them in the JLA Satellite. The twins decided to take Wendy and Marvin's places since they were leaving.[10]

Training in the Hall of Justice 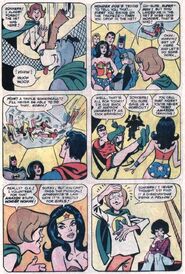 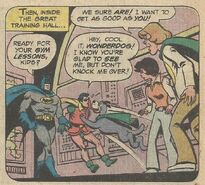 Retrieved from "https://superfriends.fandom.com/wiki/Jr._SuperFriends?oldid=84231"
Community content is available under CC-BY-SA unless otherwise noted.