Jonathan Kent[1]was from a farming family that lived in Smallville.

He was married to Martha Clark and the adoptive father of Clark Kent.

He was also the owner of the Kent's General Store.

On the parallel-universe of Earth-One, Jonathan was a former race car driver, who is a farmer on a farm just outside of Smallville. After he and Martha find the toddler Kal-El in his rocket, they take him to the Smallville Orphanage and later formally adopt him, naming him "Clark" (this is same in Earth-1A continuity).

They soon discover that Clark possesses a fantastic array of superpowers. Around the time Clark starts school, the Kents sell their farm, and the family moves into Smallville, where they open a general store. During Clark's early grade school years, Jonathan trains young Clark in the use of his superpowers to the best of his knowledge while urging him to keep the use of his powers a secret. He soon takes on the superhero persona of Superboy.

After Clark graduates from high school, Jonathan and his wife Martha take a vacation to the Caribbean Islands, where they contract a fatal and rare tropical disease after handling materials from a pirate's treasure chest they had exhumed; despite Superboy's best efforts, Martha dies, with Jonathan dying soon thereafter.[2] Before dying, Jonathan reminds Clark that he must always use his powers for the benefit of humanity. Clark mourns his parents and moves to Metropolis to attend college.

The Adventures of Superboy 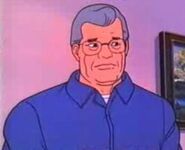