Member of the Elementals

In the parallel universe of Earth-1A, as a local celebrity, Jeannine Gale has helped host the Gotham City telethon with the SuperFriends, during the summer of 77'. A villain named Greenback interrupts the telethon by announcing that he had kidnapped Bruce Wayne. It is not long before Aquaman, Wendy Harris, Marvin White, and Jeannine were captured by him. They were soon rescued by Wonder Woman, but only because Jeannine had started to sing a song about Wonder Woman and while listening to her song she gained enough strength to save them.[1]

About a year later, in late 78' at a dinner party with Mr. Wayne, Jeannine, Grant Arden, Crystal Marr, Ginger O’Shea, and Sandor Fane and others were talking about Sandor's studies on Paracelsus,[2] and his preoccupation with Alchemy. He told them he had discovered a way of summoning the 'four spirits of the elements.'

After dinner, Bruce took off to protect the city. Sandor kidnapped Jeannine, Crystal, Ginger, and Grant to test his theory of inhabiting with the spirits of the elements.

Soon all the elementals are subdued by the SuperFriends who eventually decide to help them become heroes. Ginger creates a new costume for each one of them that reacts with their powers.

The Overlord broadcasts that he would attack selected locations each residing with the four elements. Jeannine and Robin head to Texas to stop an oil field from exploding. While Robin is inside, Jeannine then changes the weather to make it snow and freeze the whole factory. Upon completion, the pair returns to the Hall of Justice.[3]

Background Information on the Elemental Sylph

Sylph (also called sylphid) is a mythological spirit of the air. The name 'Sylph' originates in the 16th century works of Paracelsus, who describes sylphs as invisible beings of the air, his elementals of air.[5]

According to the SuperFriends Comic Book, issue #14, the 'Elemental Spirts' have a 300 years life-cycle. Upon death, the Sylphs will turn into mists. In order for them to be set free, and gain true 'spirits', they must inhabit a human-form and must either marry or perform good deeds the rest of their life.

Abilities of the Element Sylph

Inhabited by the elemental Sylph, Jeannine has: 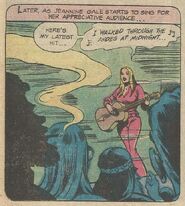 Jeannine performing Midnight in the Andes on stage. From SuperFriends, #4 (April, 1977)
Add a photo to this gallery

Retrieved from "https://superfriends.fandom.com/wiki/Jeannine_Gale?oldid=80909"
Community content is available under CC-BY-SA unless otherwise noted.