Jayna is the twin sister of Zan. The two of them make up the Wonder Twins, which replaced Marvin, Wendy and Wonder Dog as Junior SuperFriends.

Continuity from SuperFriends Comic Book
Zan and Jayna were born mutants on the planet Exxor. They are genetic throwbacks to an ancient race of Exxorian shapeshifters. While still infants, a great plague swept across Exxor killing hundreds, including their parents. The twins were raised in an interplanetary circus until such time that they came of age. While their they cared for Gleek. Soon they became frustrated with the enslaved life of a carnival performer, so they fled from Exxor and traveled to Earth where they eventually aided the Super Friends in battling the forces of Grax.[3] Not long after the Wonder Twins first arrive on earth and help the Super Friends defeat Grax, their english is still not the greatest. The Super Friends ask Professor Nichols if he would allow them to stay with him so he could teach them how to adjust to their new life on earth. He accepts, and he becomes their mentor.[4] Meanwhile, the Super Friends also assist in training them at the Hall of Justice.[5] 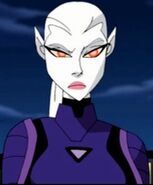