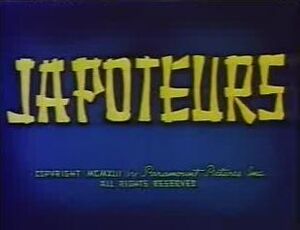 Japoteurs (1942) is the tenth of seventeen animated Technicolor short films based upon the DC Comics character of Superman, originally created by Jerry Siegel and Joe Shuster. The first Superman cartoon produced by Famous Studios (the successor to Fleischer Studios), Japoteurs covers Superman's adventures stopping Japanese spies from hijacking a bomber plane and bringing it to Tokyo. This cartoon does not bear the Famous Studios name because that company had not yet been fully organized after Max Fleischer was removed by Paramount Pictures from the studio which bore his name. The cartoon was originally released to theaters by Paramount Pictures on September 18, 1942. The word "Japoteurs" is a portmanteau of the words "Japanese" and "saboteurs".

The story begins with a shot of the front page of the Daily Planet. The headline reads "World's Largest Bombing Plane Finally Completed." The man reading the newspaper is Japanese, he stands up and looks at a picture of the Statue of Liberty in his office, then pushes a button on his desk, and the picture changes into one of the Japanese flag. He bows to it and jams his glowing cigarette into the news headline. Later, the Japanese man and some acquaintances knock a guard out as the plane is being loaded for a test run. Clark Kent and Lois Lane are taking a tour of the new bombing plane for the Planet. When everyone is told to get off, Lois stays behind and hides in a locker on board the plane.

As the plane takes off, we see that there are other stowaways aboard. Hidden inside what look like bombs are the Japanese men. The spies tie and gag the pilots and hijack the plane. Meanwhile, Lois emerges from her hiding place and moves over to the cockpit. As she's about to open the door, she notices that the Japanese spies have hijacked the plane. She sneaks into the room and calls for help on the radio, however the spies seize her. In response to her calls for help, fighter planes are sent to stop the hijackers. In response, the hijackers deploy a bomb, which stops the fighters from taking off. Clark Kent goes into an elevator and changes into Superman as it goes up to the roof.

The cartoon, and the stereotypical Japanese characters in particular, are done in a style typical of American propaganda during World War II. Many cartoons of the time followed a similar vein, such as the Schlesinger/Warner Bros. cartoons Scrap Happy Daffy (1943), Daffy - The Commando (1943), and Herr Meets Hare (1945), to name a few. Such films typically show Japanese and German characters in a negative light as the American hero makes short work of them.

The plane catching scene at the end is strikingly similar to a scene in Superman Returns (2006), in which Superman (Brandon Routh) stops an airplane from crashing into a baseball stadium (that resembles former Yankee Stadium) by pressing his weight into the nose and carefully lowering it onto the field.

Retrieved from "https://superfriends.fandom.com/wiki/Japoteurs?oldid=68354"
Community content is available under CC-BY-SA unless otherwise noted.