Start a Wiki
Injustice Gang of the World 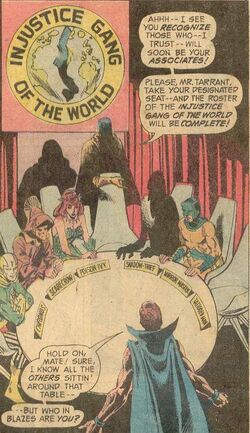 The original gang, which consisted of Chronos, Mirror Master, Poison Ivy, Scarecrow, Tattooed Man and the Shadow Thief was organized by the mysterious Libra, who at the conclusion of their first case, became one with the universe.[1] Undeterred, Poison Ivy soon regrouped with five others (Captain Boomerang, I.Q., Ocean Master, Plant Master, Shark) but quickly failed.[2] The original team returned twice more in the name of injustice. These five had one unsuccessful encounter with the JLA on their own,[3] and one led by Abra Kadabra.[4]

In the parallel universe of Earth-One, a shadowy figure has assembled some of the Justice League members' greatest foes for his own mysterious ends: Chronos, Mirror Master, Poison Ivy, the Scarecrow, Shadow Thief and Tattooed Man. Libra as the shadowy figure is called, has constructed an unusual device that has enabled him to steal half the powers or energies of any given person. As they meet in their secret Satellite the mysterious figure lays out his plane. He wants his new team to attack the JLA one member at time, then bring them up to the Satellite so that he may steal their powers. Satisfied with these results, he then turned his device upon the universe itself, hoping to become a god. Instead, Libra was absorbed into the universe itself, effectively disintegrating him and spreading his essence across the cosmos. Thus freeing the JLA and turning the remaining villains into fugitives.[5]

The second encounter with the 'Injustice Gang', involves Hawkman, Elongated Man, Aquaman, Green Lantern, Green Arrow, the Atom (current chairman), who are on patrol in the JL Satellite. They receive an alert notifying them of the Injustice Gangs activities. The Ocean Master and the Shark are busy siphoning water from the canals of Venice. I.Q. and Captain Boomerang are somehow siphoning sand from the Sahara. And Poison Ivy and the Plant Master are busy siphoning foliage from New York’s Central Park. The Atom sends Aquaman and the Green Lantern to Venice; the Green Arrow and Hawkman to the Sahara and himself and the Elongated Man to Central Park. They defeat their foes but are unable ascertain the reason behind the mischief.[6]

A series of minor conflicts between Wonder Woman and her fellow team members comes to a head when the Amazon Princess decides to quit the JLA. She angrily enters the Justice League Transporter. Her angered departure almost disbands the team. While on the streets of New York below, Wonder Woman sees Poison Ivy, the Scarecrow and an unidentified individual fleeing the scene of a bank robbery. She attacks the large man only to find out that he is a ‘new’ costumed hero who is actually Mark Shaw, a former Manhunter (an ancient sect of crime fighters). In the confusion, Poison Ivy and the Scarecrow escape. The man introduces himself as the Privateer. As they spend time together, he soon realizes that something is aggressively odd about Wonder Woman’s behavior and decides to contact the JLA. Meanwhile, the Scarecrow suggests hiding out in the satellite HQ that Libra used. Poison Ivy agrees. After nearly killing the Privateer, in an unprovoked attack, Wonder Woman leaves and begins to realize that an outside force is trying to take control of her mind. She struggles against the force, but ultimately loses. Dominated, she teleports up to the Injustice Gang's satellite headquarters. Unknown to her and the JLA, her mind is controlled by the Construct (sentient lifeform that can inhabit androids), now reborn as Construct II after his defeat by the Atom.[7] It now becomes clear that this entity is behind the reorganization of the Injustice Gang. As the Privateer and Batman search for Wonder Woman, she is busy confronting Superman at the JLA satellite for its domination and control. At the same time, the Construct sends a mesmerized Scarecrow, Poison Ivy, Mirror Master, Chronos, and Tattooed Man against the other JLA members ready to do battle (Aquaman, Atom, Batman, Black Canary, Elongated Man, Flash, Green Arrow, Green Lantern, Hawkman and Superman). It appears the Injustice Gang may have the upper hand, but the Flash is able to reflect the Scarecrow's fear rays back on the entire Injustice Gang which causes the Construct II to destroy the satellite headquarters of the Injustice Gang. With the Construct II seemingly destroyed, the Injustice Gang awakens, as if from a trance, with no memory as to how they came together. Wonder Woman is also free of the Construct II's mental dominance. Exhausted, she collapses into Superman's arms. Though the case is closed, none of the JLA are aware that the Construct II was the mastermind controlling the 'Injustice Gang Of The World'.[8]

The Flash and Wonder Woman attempt to stop the Mirror Master, and Poison Ivy, from robbing the Central City Museum. As they do battle, fellow good-guy, Ultraa (from Earth-Prime) arrives, but the villains are able to teleport away. They rendezvous with the other members of the ‘Injustice Gang Of The World.’ Their mysterious new leader has established their new base of operations in the ‘Secret Sanctuary,’ former headquarters of the JLA. He has tasked the re-formed 'Injustice Gang' with stealing four seemingly worthless items, promising that these items will give them control of every form of energy on Earth. These four items were apparently left by aliens a millennia ago, who anticipated using them when they return to conquer. The Flash, Wonder Woman, Superman, Green Lantern, and the Red Tornado assemble aboard their satellite headquarters to discuss the situation with Ultraa. He has decided that super-powers (used for evil or good) are a danger to the world, so he ambushes them with his negative-radiation device. Ultraa leaves the JLA neutralized and sets out to track down the Injustice Gang. As he attacks, Poison Ivy, Mirror Master, Chronos, Tattooed Man, and Scarecrow, he loses ground because the negative radiation has actually increased the villains' confidence in their abilities. In turn, the Injustice Gang successfully brings the four alien artifacts together; which gives them control over all forms of energy on the planet. The nearly incapacitated JLA must overcome Ultraa’s will-deadening device and come to his rescue. As they overcome their disadvantage, they are able to defeat the villains and discover the identity of the mysterious new leader of the Injustice Gang. It is Flash's future- foe, Abra Kadabra. The JLA doesn't know what to do about Ultraa.[9]

Retrieved from "https://superfriends.fandom.com/wiki/Injustice_Gang?oldid=74234"
Community content is available under CC-BY-SA unless otherwise noted.