Start a Wiki
Injustice: Gods Among Us 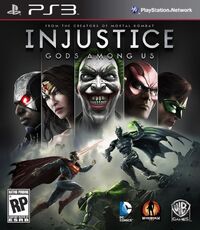 Injustice: Gods Among Us is an upcoming action fighting game  video game based on the DC Comics universe. It is scheduled to be released in April 2013 for Microsoft's Xbox 360, Sony's PlayStation 3, and Nintendo's Wii-U. It is being developed by NetherRealm Studios and published by Warner Bros. Interactive Entertainment.[2]

Following the destruction of Metropolis and the deaths of his wife Lois Lane, their unborn son, and his best friend Jimmy Olsen, all at the hands of the Joker, Superman establishes a new world order, causing heroes to stand in opposition to each other. A battle ensues between the forces of Superman's regime and those allied with Batman's rebellion, in alternate universe.

Like Mortal Kombat, Injustice: Gods Among Us is a 2D fighting game featuring numerous DC characters. Characters will be organized according to skill features: Power Users and Gadget Users. Each type can interact with their environments differently. All characters will have several unique abilities and special moves. The game will feature a single-player component in addition to multiplayer and tournament features.

The game also features the light, medium, and heavy attack array traditional to fighting games. These attacks can trigger various move sets, can chain together to form combos, and will gradually fill up the player's Super Meter. Characters will also have "Character Trait" buttons that activate unique fighting styles and abilities.

While modeled somewhat on Mortal Kombat, Injustice features a new blocking system more akin to Street Fighter and a new "Wager" system. During a combo, the defending player can activate it by pressing forward and X (A for Xbox 360). At this point, both players place a hidden bet using a portion of their super meters. The highest bidder wins the clash, either rewarding health or finishing off the devastating combo. The Wager immediately ends the combo and triggers unique character dialogue before initiating combat again.

Game Stages will feature destructible environments and character costumes will deteriorate over the course of the battle. Also in the style of Mortal Kombat, the characters will recieve notable battle damage, such as exposed muscle, although it will not reach the extremities of the aformentioned series. Some Stages will feature objects that players can use. The Batmobile, for example, can fire rockets at players in the Bat-Cave location.[3]

Injustice will feature a launch roster of twenty-four characters from the DC Comics universe, spanning from iconic characters like Batman, Superman, and Wonder Woman, to lesser-known characters such as Solomon Grundy.

Now Confirmed, twenty-four characters have been officially revealed or otherwise confirmed as playable, with various more hinted at or otherwise referenced to be making an appearance in some capacity in the game. Later on there will be 4 DLC characters but who these characters are, is currently unkown.

The following characters have been officially confirmed so far:

Below is a list of non-playable characters confirmed for the game:

Injustice: Gods Among Us will feature 15 stages.

The List below is all the confirmed Stages so far: 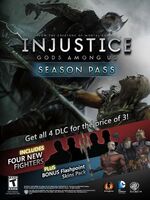 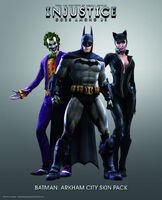 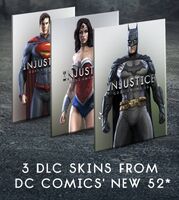 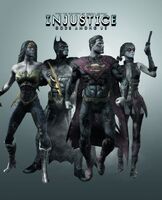 Injustice: Gods Among Us' companion mobile app with a single-player fighting game component was released on iTunes on March 29th. It is a free-to-play game that allows users to make in-app purchases. As characters progress and unlock content in either the full game or the mobile game, they will also unlock content for the other, rewarding players who play both components. Players can earn rewards on the mobile version by syncing with the console version and vice-versa by logging in to a WB I.D. . 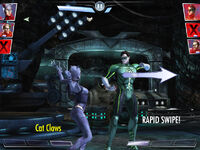 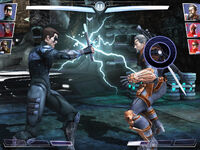 Injustice: Gods Among Us was first announced on May 31, 2012,[4] shortly before the Electronic Entertainment Expo. Developer Ed Boon revealed plans to offer depth and promised a rich amount of single-player content and layered features for tournament players.[5] Similar to Boon's previous DC-related title, Mortal Kombat vs. DC Universe, there are restrictions on how violent the game can be, though Boon states he is planning to push the T rating, replacing violence with "crazy, over-the-top action." [6]

There is a comic book series that serves as a prequel to the game that can be purchased digitally for $0.99 each issue, or $3.99 for a physical version.

The Hall of Justice, which first appeared in the Super Friends series, is the seen in this game, and it is a playable stage.

Retrieved from "https://superfriends.fandom.com/wiki/Injustice:_Gods_Among_Us?oldid=59596"
Community content is available under CC-BY-SA unless otherwise noted.