Hawgirl is sworn to protect Earth from evil. She is a part-time member of the SuperFriends.

On the parallel-universe of Earth-One, Shayera Hol (phonetically identical to Shiera Hall) was born on Thanagar, which had a scientifically advanced civilization in which crime was virtually unknown. As an adolescent, Shayera joined the Thanagarian police force and was assigned to assist the force's most decorated officer, Katar Hol, in capturing the Rainbow Robbers. At first, Katar was furious at being assigned an inexperienced young woman as a partner, but he nevertheless became strongly attracted to her. They were soon married.

Ten years later, the couple was sent to Earth in pursuit of the criminal Byth Rok. Upon reaching Earth, they were befriended by Midway City police commissioner George Emmett, who established cover identities for them as Carter and Shiera Hall. After capturing Byth and bringing him back to their planet, Katar and Shayera chose to return to study Earth's crimefighting methods, and they fought against evil as the superheroes Hawkman and Hawkgirl.

Alien Physiology: Shayera has no special powers, but as a Thanagarian, She possesses several gifts that are common to members of her race, but set her apart from normal humans. A Thanagarian's life span is significantly greater than that of a normal human being. In the prime of her life, Shayera was actually older than many of Earth's senior citizens. A Thanagarian is also physically heartier than the average Earth human. They are stronger, with greater stamina and a greater resistance to pain. Thanagarians also possess enhanced senses. 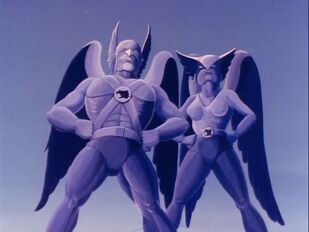 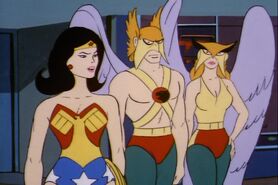 An Unexpected Treasure - her final appearance

Retrieved from "https://superfriends.fandom.com/wiki/Hawkgirl?oldid=63877"
Community content is available under CC-BY-SA unless otherwise noted.