Hal Jordan is the greatest Green Lantern, an Intergalactic Space Patrolman and member of the Green Lantern Corps, chosen by the Guardians of the Universe for his ability to overcome great fear. The strength of his willpower allows him to wield the universe's mightiest weapon, a power ring controlled by his thoughts. In his secret identity he is a test pilot working for Ferris Aircraft where his boss Carol Ferris is also his romantic interest. His powers are useless against anything colored yellow. He is also a founding member of the Justice League.

In the parallel-universe of Earth-One, not much is known about Hal's early life. We do know that upon returning to Coast City after a visit to Metropolis University, young Jordan met Clark Kent of Smallville. Their plane hit heavy turbulence which spun the aircraft out of control. Jordan helped calm frightened passengers while Clark Kent secretly stabilized the 707 jet liner. A few nights later, Jordan's life was jeopardized by his lack of fear. He inadvertently came across a smuggling ring while scuba diving and charged in without concern for his safety. Jordan was taken aboard their World War II submarine but was later rescued by the authorities when the submarine was run aground by mysterious forces. Superboy tells Hal that he must learn to combine his quality of fearlessness with good judgment in order to keep from placing his life or the lives of others in jeopardy. Hal takes the words to heart.[4]

After high school, Jordan enrolled in a West Coast College and earned a degree in aviation engineering. Following that, Jordan enlisted in the Air Force and served under Captain Richard Davis. The commanding officer became mentor and lifelong friend to the young pilot.[5]

Another Air Force friend of Hal's, pilot Bill Davis, was killed in Korea. Over the years, Hal kept in touch with Bill's elderly parents, Sally and Steve Davis. [Note: There does not appear to be any relation between Richard Davis and Bill's family].[6]

With his degree in aviation engineering, Jordan easily rejoined civilian life. He designed a flightless trainer for the Ferris Aircraft Corporation in Coast City, California and for some time was Ferris' number one test pilot. Though his aviation career showed great promise, Jordan was passed over by the astronaut program. Metropolis reporter Clark Kent interviewed the young test pilot for the Daily Planet.[7]

On one notable occasion (February of 1966 in the Earth-1A universe), as Hal was patrolling the Canaveral a day before Ferris Aircraft was to launch a new booster rocket for the 'Explorer Project', he was shot or more specifically grazed by a ray-gun in an ambush. Once he informed his superiors, in less than a half an hour he found himself embroiled in a Martian invasion and a kidnapped alien. Soon, the launch pad at Ferris Aircraft contained Superman, Batman, Robin, Wonder Woman, the Flash, Aquaman and Rex the Wonder Dog. They had hoped to find a missing hero and soon to be ally Martian Manhunter. They soon discover a plot to kill the Manhunter, Flash had spoken about. He was strapped to the top of the booster rocket. Just then, Commander Blanx, and a small squadron of White Martians strike. In the battle that ensued, our heroes defeat Blanx and his men, and rescue the captive J'onn J'onzz. After their success, Superman, Wonder Woman, Aquaman, Flash and the Manhunter discuss forming a club or a society to uphold Justice in the World. Batman says he’s not much of a joiner and the rest discuss the panic that was involved in this Martian excursion and the fear that coming together as a team with a Martian might foster. So they decide to wait until the time is right. Hal Jordan and the gathered reporters present also offer their oath of silence believing that global panic would not be good.[8]

In October of that same year, a space-patrolman named Abin Sur of the Green Lantern Corps crash lands in the middle of the California desert. As he lays dying, he commands his power ring to seek out a worthy successor for Sector 2814 – one who proves to be fearless and strong-willed. Miles away, test pilot Hal Jordan is examining a stationary ‘flight simulator’ at the Ferris Aircraft Company when a corona of green light envelops him, pulling him along with the simulator to the spot of Abin Sur's crashed vessel. Abin Sur tells Hal that the 'power' of the ring selected him to take on the role of the Green Lantern. He gives him the ring and a power battery. He instructs him that the ring will obey his every command but is powerless against anything colored yellow. He also tells him that the ring's energy must be charged from the power battery once every twenty-four hours. Hal agrees to accept the responsibility of wielding the ring in the cause of justice, and, with that, Abin Sur passes away. Hal Jordan is now Green Lantern.[9] This historical-transaction was concealed from the Guardians because of an 'Ion-Storm.'[10]

About nine-months later, the Guardians realize they have a new recruit and decide to check on him. While he is in-flight, testing a new aircraft, his ‘astral-form’ is transported to the world of the Guardians, who seek to know who took over the role of Green Lantern in that sector of space from Abin Sur. Hal recounts the events that led to him becoming the Green Lantern. Convinced that Hal is worthy of the title, but not ready to know of their existence; they erase his memory and return his astral form to his physical body. Aside from a feeling of dizziness, Hal is unaware of what just happened.[11]

A few years later (late 1969 in the Earth-1A universe), Hal as Green Lantern joins forces again, with the Flash, Wonder Woman, Superman, Batman, Aquaman and the Martian Manhunter to stop the invading Appellaxians. The assembling resulted in the formation of Justice League of America![12]

Residing on planet Earth in the guise of test-pilot Hal Jordan, Green Lantern was entrusted by the Guardians of the Universe — an immortal race of aliens from the planet Oa in the center of the universe — with the task of defending Earth and its space sector from the power-hungry villains of the universe.

A Venusian named Kairo assisted Hal Jordan as his mechanic/sidekick. Typically, Kairo had the blue skin and pointy ears of his race, and because he had no super powers was prone to need rescuing, although he did contribute a fair amount as well.

According to Earth-1A continuity, Lex Luthor, Cheetah and Sinestro team-up to target a few of the "greater Superfriends". They devise a plan to travel back in time to weaken the team by making sure that certain Justice Leaguers never existed (in addition to Green Lantern, Superman and Wonder Woman were also targeted). Lex Luthor wanted to target the Green Lantern. So he travels back to the day Abin Sur was looking for a successor. Luthor convinces Colonel Jordan his life is in danger and instead is carried off by Abin Sur's green beam, Luthor was and becomes the Green Lantern instead. The damaged timeline is corrected when Black Vulcan, The Flash and Batman also go back in time to thwart Luthor and ensure Jordan fulfills his destiny of being the Green Lantern, thus saving their teammate.[13]

The ring is ineffective against anything colored yellow.[14]

It must also be recharged at Green Lantern's power battery every 24 hours to remain functional. 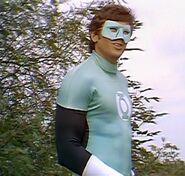 Green Lantern[16]
Add a photo to this gallery

Retrieved from "https://superfriends.fandom.com/wiki/Hal_Jordan?oldid=83467"
Community content is available under CC-BY-SA unless otherwise noted.