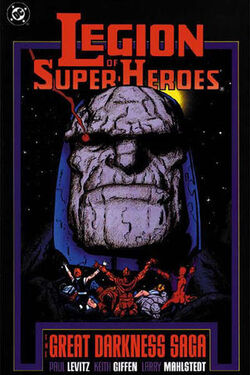 It took place in DC's mainstream continuity, however it also took place in the Superfriends Universe as well, as it was reprinted in part in Super Powers # 1 (1986).[1]

The Great Darkness War, which was what this story was about, was also referenced in the Atlas of the DC Universe in 1990.

The trade paperback of this story was released by DC Comics in November 2010.

The Great Darkness Saga takes place in the 30th Century and chronicles the fight between the Legion of Super-Heroes and the newly-risen Darkseid, the New God of Apokolips.

Mon-El and Shadow Lass are assigned by the United Planets to investigate a planet filled with hidden defenses, harboring an evil they cannot suspect.

Chapter One: "And the Servant Shall be a Sign..."

The Legionnaires face dark and powerful beings stealing potent artifacts from around the universe on behalf of their unseen master.

After capturing one of the thieves, the Legion run tests to discover what kind of creature it is. The DNA reveals it is a native of Talok VIII and not only that, its Shadow Lass' dead ancestor Lydea Mallor. Mordru becomes the latest victim in the hunt for magic, when Darkseid stole his power. He is imprisoned beneath Romdur Castle on the planet Avalon. Dream Girl takes the team to meet her sister, Mysa, The White Witch when a servant of the darkness attempts to abduct her. It fails and Dream Girl gets a vision of the Legion's final battle.

As the Legionnaires battle the minions of darkness on Sorcerer's World (aka Zerox), Mon-El discovers the Master's identity. By invading Mon-el's mind, the master learns of Daxam. The Council of Teachers casts a spell to defeat the Darkness, and a mysterious child appears.

Chapter Four: "Within the Darkness..."

While the Legion fights his clone-minions, Darkseid takes mental control of the populace of Daxam (Mon El's home world) and unleashes them on the universe as his warriors.

Darkseid's army of the entire population of Daxam, runs rampant throughout the universe, each of them with powers equivalent to Superman's. The Legion calls in all of its members, including 20th century Superboy and reservist Supergirl to aid in the battle. It also calls on the aid of Dev-Em, the Legion of Substitute Heroes, the Wanderers, and the Super-Heroes of Lallor. Finally, Element Lad defeats the Daxamites by altering part of the atmosphere to lead, and the White Witch teleports them back to Daxam and removes Darkseid's spell, with the help of the child who has rapidly evolved into Highfather. Highfather converts Darkseid's dark Orion-clone into a duplicate of Orion himself, who fights Darkseid and is killed. Highfather also empowers Superboy and Supergirl to lead the fight against Darkseid, which they wage valiantly. But the villain's incredible power cannot be matched by the Legionnaires. Just as they are on the brink of defeat, the Daxamites approach Earth en masse, ready to attack Darkseid with powers even he cannot match. Darkseid breaks off the battle, tells the Legionnaires they have won for the moment, and teleports away. In the aftermath, the White Witch joins the Legion, Light Lass quits, and Brainiac 5 tells Supergirl he is finally over his crush on her. Kara, before she leaves for the 20th Century, remarks that that is a pity, since she was beginning to notice how cute he was.

Garth Ranzz (aka Lightning Lad) and Imra Ardeen (aka Saturn Girl) are about to have their first child. They are aboard space satellite, Medicus One. As Garth rushes to be by his wife’s side, he is stopped by one of the doctors on board and asked to have a quick drink. The doctor turns out to be Starfinger in disguise and tries to abduct him, but Lightning Lad is able to stop him. Meanwhile, a group of Legionnaires (Cosmic Boy, Power Girl, the White Witch and Colossal Boy) go to the planet of Avalon to find if Mordru is still powerless and imprisoned after Darkseid vanished. To their horror, they see he has his power back and has escaped. He is now in the safety of some of his followers back on the Sorcerers World. The rest of the Legionaries are orbiting earth when they hear the news. They head out to help fight Mordru. While en route, Shadow Lass is magically kidnapped and teleported to where Mordru and his followers are. At the same time, Shadow Lad from the Legion Academy is kidnapped as well. The servants of Mordru believe the darkness power of Shadow Lass and Shadow Lad could help Mordru achieve his full power, and they are correct. In so doing, a darkness covers the planet and begins to spread. The darkness reaches Medicus One just as Saturn Girl gives birth to her child. At the same time, the Legion arrive at the Sorcerers Planet and defeat Mordru’s servants before they can fully revive him. This caused the darkness to dissipate. Saturn Girl gives birth to a healthy baby boy they named Graym. She is somewhat surprised, because at times she thought she detected to presence of two mental patterns, not one. Unbeknownst to her, her suspicions were correct. Darkseid shrouded the existence of the second child long enough for him to steal the child. He names him Validus and sends him to the past to be agent in the cause of Darkness (a mindless beast with incredible strength). Thus Darkseid’s curse is fulfilled!