Golden Eagle was a superhero who in reality was Charley Parker, who used his Nth Metal Wings to fight crime in Midway City as an ally of Hawkman and a member of Titans West.

In the parallel-universe of Earth-One, Charley Parker, like Clark Kent was an orphan. Charley lived in the Midway City orphanage and idolized Hawkman. At one point he sent a letter to Hawkman describing his home-made "Hawkman" costume.[2] When Hawkman had been ordered back to Thanagar, disappearing from the public view,[3] Charley decided to make his appearance as ‘Golden Eagle’![4]

Charlie met the JLA, when they were attacked by Hawkman's old foe Mark Mandrill, the Matter Master. Together they defeat this old foe.[5] Parker explains to the JLA that one day he had been wearing his ‘Hawkman’ costume and fantasizing he was the Thanagarian hero when a strange light enveloped him turning his costume into an exact replica of Hawkman's costume. This upgrade gave him the ability to fly due to the replicated wings. It also gave him the ability to change back to his street clothes and back into the Golden Eagle costume instantaneously.[6]

Charley was seen again when Green Arrow took him aboard the JLA Satellite suggesting he could be a new "mascot" (kind of like Snapper Carr).[7]

A few years later he emerged as a member of Teen Titans West.[8]

Charley did not appear in any episodes of the Superfriends. 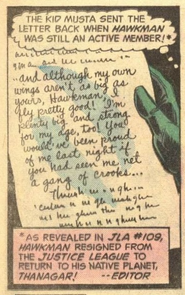 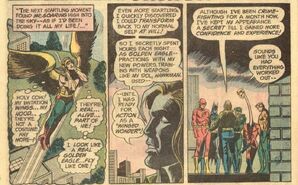 Retrieved from "https://superfriends.fandom.com/wiki/Golden_Eagle?oldid=76815"
Community content is available under CC-BY-SA unless otherwise noted.