You may be looking for The Gabriel's Horn

Mal Duncan is the keeper of Gabriel’s Horn. It was given to him by the Angel Gabriel after a battle Mal had with the Angel of Death. He received this horn as he unconsciously did battle with Angel of Death.

The keeper of the horn has the burden of knowing that if he should lose a fight—to anyone—he must die. Gabriel's horn, when blown, gives him unspecified powers to use whenever the odds are against him in battle. It is also able to teleport those whom Mal concentrates on. Presumably to ensure Mal does not lose a fight. 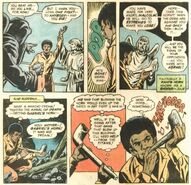 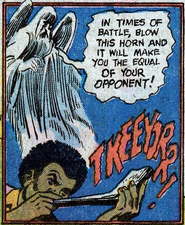 Add a photo to this gallery
Retrieved from "https://superfriends.fandom.com/wiki/Gabriel_Horn?oldid=62192"
Community content is available under CC-BY-SA unless otherwise noted.