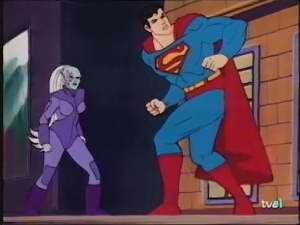 Lois Lane, Clark Kent, and Jimmy Olsen are all covering a story at STAR Labs, where an alien space craft has been discovered. When they join two of STAR Labs scientists, Albert Michaels and Jenet Klyburn to check out the ship, there they discover two aliens in suspended animation, until Jimmy presses a button and accidentally wakes them up. One of them is a police officer, while the other is a criminal who wants to take over the planet. Superman now has to find out which one is the good guy and which one is the bad guy.

Retrieved from "https://superfriends.fandom.com/wiki/Fugitive_from_Space?oldid=53406"
Community content is available under CC-BY-SA unless otherwise noted.