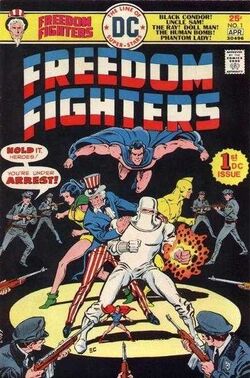 In the parallel universe of Earth-X there was a small group of heroes called the Freedom Fighters.[1] On this ‘other’ earth, the Nazis eventually conquered America killing most of earth’s heroes. The remaining Freedom Fighters (Black Condor, Doll Man, Human Bomb, Phantom Lady, the Ray, and Uncle Sam) went underground. While in hiding, they come across an unusual sight: costumed super-heroes fighting the Nazi army. These heroes were members of the Justice League of Earth-One (Batman, Elongated Man, Green Arrow, and Red Tornado) and the Justice Society of Earth-Two (Dr. Fate, Superman, and Sandman). Together, they defeat the evil Nazi’s and save the planet from tyranny. Soon after the heroes from Earth-One and Earth-Two leave for home, confidant that the Freedom Fighters will continue to protect their world from evil.

Decades later, the Freedom Fighters (kept young by the mystical presence of Uncle Sam), moved to Earth-One for a time and had several adventures there, both with the Freedom fighters and on their own, before returning to Earth-X following a final battle with the Silver Ghost and the apparent death of Firebrand.

A Few Members of the Team

Retrieved from "https://superfriends.fandom.com/wiki/Freedom_Fighters?oldid=68045"
Community content is available under CC-BY-SA unless otherwise noted.