You may be looking for the Batgirl Disambiguation Page.

Elizabeth Kane was the niece of a rich Gotham City’s socialite, Kathy Kane. Kathy secretly operated as the Batwoman of Gotham City, and an occasional ally of Batman and Robin. After discovering her aunt's dual identity, Betty convinced Batwoman to train her as her sidekick. Making her own costume, Betty would become Bat-Girl and undergo training alongside Kathy. Kathy hoped that her niece would soon lose interest; however, Betty would prove herself again and again.[1] During her adventures with Batwoman, Bat-Girl developed a romantic interest in Batman's sidekick Robin.

In the parallel-universe of Earth-One, Bat-Girl would aid Batman, Robin, and Batwoman in combating villainy wherever it rose.[2]

When an alien from another dimension would come to Earth and threaten Gotham City, Batman, Batwoman, Robin, and Bat-Girl would attempt to stop the creatures. Robin and Bat-Girl would find themselves banished to the aliens' dimension. There, Bat-Girl would once more press Robin to share feelings with her, Robin would begin to warm up with her before they would return to Earth and help Batman and Batwoman turn away the invaders.[4] When a feud between Clayface and the Joker caused a series of crimes in Gotham City, Bat-Girl aided Batman, Robin, and Batwoman in capturing the Joker so that Batman could pose as him and capture Clayface.[5] When extraordinary circumstances find Batman turned into a genie and forced to do the bidding of two crooks, Robin and Bat-Girl would team-up to stop the crooks and free Batman.[6]

This would be Bat-Girl's last adventure with Batman and Robin for a number of years as she and her Aunt Kathy would retire from costumed adventuring for a time. Betty became a renowned tennis champ. During this period, Betty would meet her successor Barbara Gordon.[7]

She came out of retirement to aid the west coast incarnation of the Teen Titans and their east-coast counterparts (reuniting her with Robin) in battling Mr. Esper.[8]

Elizabeth did not appear in any episodes of the Superfriends. 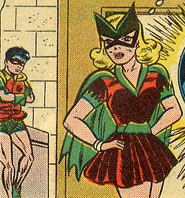 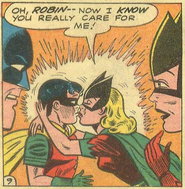 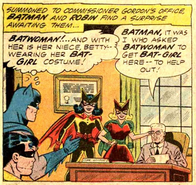 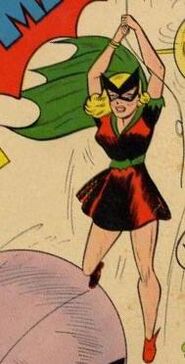 Retrieved from "https://superfriends.fandom.com/wiki/Elizabeth_Kane_(Bat-Girl)?oldid=74180"
Community content is available under CC-BY-SA unless otherwise noted.