Start a Wiki
The Elementals 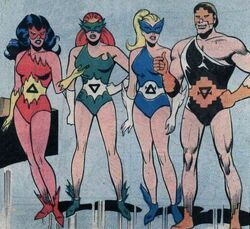 Each Elemental had a 300 year life-cycle. In order for them to be set free, and gain true 'spirits', they had to inhabit a Human-form and either marry or perform good deeds the rest of their life.

The Plant Elementals also existed on Earth, although they didn't seem to share any connection with the other four Elementals.[1]

Gotham socialite, Sandor Fane had shown a manuscript to four individuals he had secretly chosen to be the hosts of the elements. He believed that he would be able to use this manuscript; which had been written by the legendary alchemist Paracelsus,[2] to summon the four primal elementals and bind them to his victims, making them the unwilling hosts. He also gave them each costumes, that apparently do not fit their powers very well. He tells them that the SuperFriends were their enemies needed to be destroyed. Eager to end their mortality and become 'spirits' they comply.[3]

The elemental spirits now shared the bodies of four humans:

The Elementals first appear inside four giant translucent jewels located in four different cities: a ruby appeared near the Gotham City Police Department central station, an emerald appeared atop Metropolis Galaxy Building, a diamond appeared outside New York City near the United Nations Building, and a sapphire appeared on a beach near the Aquaman's under sea home.

They are soon subdued by Aquaman, Superman, Batman, Wonder Woman, Robin, the Wonder Twins and Gleek. The spirits and their human hosts soon come to an understanding, and become four new heroes pledged to assist the League in their fight against Sandor Fane (whom the League previously knew only as the world conquering Overlord.)

It is not long before Ginger O'Shea designs new costumes for them using special new materials created by Grant Arden, which work better with their powers (two of the costumes are made out of "air" and "water").

Retrieved from "https://superfriends.fandom.com/wiki/Elementals?oldid=91592"
Community content is available under CC-BY-SA unless otherwise noted.